Nepal: Landslide After Incessant Rainfall Kills 10 in Syangja, One Rescued 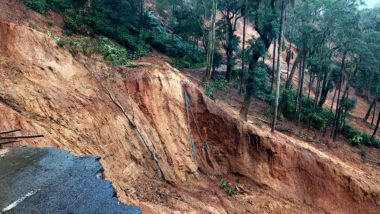 Syangja, September 24: At least 10 people, including an infant, were killed and one was injured after an incident of landslide in Nepal's Syangja district on Thursday. A seven-month-old baby was among victims. A 16-year-old girl was rescued and sent to a hospital for treatment. "We have recovered 10 bodies out of which 9 are from the same family. One injured has been sent to hospital," Chief District Officer Ganga Bahadur Chettri wad quoted by news agency ANI as saying. Nepal: Landslides in Sindhupalchowk District, 9 Killed, 22 Missing.

According to Kathmandu Post, the landslide occurred at Waling Municipality. "A seven-month-old baby, three women, two men, a teenage girl and two boys were among the deceased," District Police Office Spokesperson DSP Rajendra Adhikari was quoted as saying. Nepal reported multiple landslides in the past 24 hours. In the wee hours of Thursday, a landslide buried two houses in Gautam Daanda of Kaligandaki Rural Municipality. Nepal's COVID-19 Tally Rises to 67,804.

A 16-year-old boy died in the incident. Another landslide occurred near a settlement in Rambha Rural Municipality, in Palpa. Six people went missing after the incident. "Five people have also gone missing in Belauja of the same rural municipality after two houses were buried in a landslide last night," Ward chairman Uman Singh Saru said. A pregnant woman disappeared after a house was buried in another landslide that occurred at Surumdaanda of the same village.

(The above story first appeared on LatestLY on Sep 24, 2020 03:21 PM IST. For more news and updates on politics, world, sports, entertainment and lifestyle, log on to our website latestly.com).