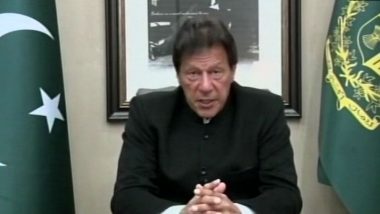 Islamabad, Sep 17:  Pakistan Prime Minister Imran Khan on Friday said Afghanistan could not be "controlled from the outside” and that Islamabad will continue to support the war-torn neighbouring country even as he urged the Taliban to fulfil the promises they have made.

“We must remember that the Afghan government is primarily depended on foreign aid,” he was quoted as saying by the Dawn newspaper.

"The Taliban must fulfil the promises they have made.

“Pakistan has a vital interest in a peaceful and stable Afghanistan and will continue to lend its support,” Khan said, adding that Afghanistan could not be "controlled from the outside".

The eight-member SCO grouping of China, Russia, Kazakhstan, Kyrgyzstan, Tajikistan, Uzbekistan, India and Pakistan is holding its 21st summit at Dushanbe. Afghanistan is an observer in the SCO.

The Taliban seized power in Afghanistan on August 15, two weeks before the US' complete troop withdrawal on August 31 after a costly two-decade war.

This forced Afghan President Ashraf Ghani to flee the country to the UAE.

The Taliban insurgents stormed across Afghanistan and captured all major cities in a matter of days, as Afghan security forces trained and equipped by the US and its allies melted away.

Thousands of Afghan nationals and foreigners have fled the country to escape the new Taliban regime and to seek asylum in different nations, including the US and many European nations, resulting in total chaos and deaths.