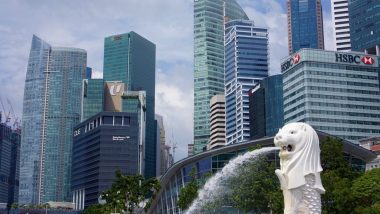 Singapore, July 14: Singapore’s economy entered a technical recession after shrinking by 41.2 percent in the second quarter compared to the previous quarter, advance estimates by the Ministry of Trade and Industry revealed on Tuesday. The economy has come to a grinding halt owing to the extended lockdown that has shut down several businesses and reduced retail spending.

A technical recession is defined as two consecutive quarters of quarter-on-quarter contraction. According to a Bloomberg report, this puts pressure on the ruling People’s Action Party, which had its weakest performance ever in last week’s election. Japan Dives into Its First Recession Since 2015 Amid COVID-19 Pandemic, Experts Fear Worst is Yet to Come.

According to reports, the authorities have flagged that they expect Singapore's gross domestic product (GDP) to shrink between 4 and 7 per cent this year, as the coronavirus outbreak continues to pose severe strains on the economy.

In May this year, Japan dived into its first recession since 2015, according to official data Monday, with the world's third-largest economy contracting by 0.9 percent in the first quarter as it wrestled with the fallout from the coronavirus.

(The above story first appeared on LatestLY on Jul 14, 2020 07:56 AM IST. For more news and updates on politics, world, sports, entertainment and lifestyle, log on to our website latestly.com).