In Switzerland assisted suicide is legal and as per the reports, approximately 1,300 people have used the services of euthanasia organisations, such as Dignitas and Exit International in the previous year. 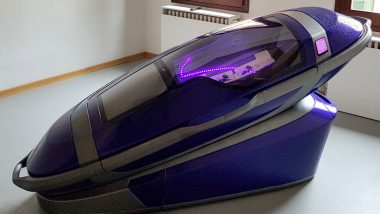 Mumbai, December 7: Switzerland has approved a machine that promises relatively painless death in under one minute. The machine induces hypoxia (absence of enough oxygen in the tissues to sustain bodily functions) and hypocapnia (a state of reduced carbon dioxide in the blood) by reducing the oxygen to a critical level in the capsule. It is designed as a coffin-shaped capsule, which allows the user to sit in it. The suicide machine is named 'Sacro'. The suicide machine is created by Dr. Phillip Nitschke also known as Dr. Death.

Sarco is engineered by Exit International, an international non-profit organisation. The non-profit organisation was founded by Dr. Phillip Nitschke. “Barring any unforeseen difficulties, we, at the Exit International hope to be ready to make 'Sarco' available for use in Switzerland in the upcoming year. It’s been a very expensive project so far but we think we’re pretty close to implementation now," Dr. Philip Nitschke said.  Engineered Human Cells' Predictive Design Enabled by New Technology.

The suicide machine can be operated from inside the pod even by blinking an eye in case the user suffers from locked-in syndrome (a condition in which a patient is aware but cannot move or communicate verbally due to complete paralysis of nearly all voluntary muscles in the body except for vertical eye movements and blinking), The Independent UK reported.  High Purity Oxygen Concentrator, Indigenously Designed and Manufactured by Walnut Medical, Being Supplied to Indian Hospitals.

In Switzerland assisted suicide is legal and as per the reports, approximately 1,300 people have used the services of euthanasia service providers, such as Dignitas and Exit International in the previous year.

(The above story first appeared on LatestLY on Dec 07, 2021 05:01 PM IST. For more news and updates on politics, world, sports, entertainment and lifestyle, log on to our website latestly.com).