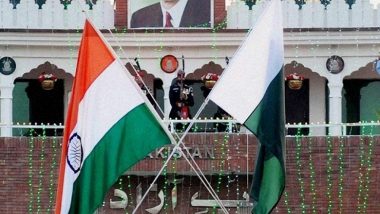 United Nations, August 13: Poland, President of the UN Security Council for the month of August, on Tuesday said it hopes India and Pakistan can work out a "mutually beneficially solution bilaterally” and favours dialogue between the two nations to sort out their differences after New Delhi revoked the special status to Jammu and Kashmir. Poland's Foreign Minister Jacek Czaputowicz is in the UN headquarters and addressed a Security Council briefing Tuesday on 'International humanitarian law - Seventieth anniversary of the Geneva Conventions: upholding humanity in modern conflict.' Article 370 Revoked: Pakistan Seeks Emergency Meeting of UNSC Over Jammu and Kashmir.

Later, Czaputowicz addressed reporters at the UN Security Council stakeout where he was asked that Pakistan has demanded for the Security Council to be briefed on the situation in Kashmir following India's decision to scrap Kashmir's special status and whether Poland supports such a request as the Council President. Czaputowicz said he has had a "phone conversation" with India's External Affairs Minister S Jaishankar and Pakistan's Foreign Minister Shah Mahmood Qureshi in the last few days.

"We expressed concerns over current tensions between India and Pakistan resulting from the proposed changed status of Jammu and Kashmir. Poland believes that the dispute can only be resolved by peaceful means and here we fully support the reaction of the European Union and statement issued by Federica Mogherini. We are in favour of dialogue between Pakistan and India to sort out the differences."

Mogherini is the High Representative of the EU for Foreign Affairs and Security Policy and Vice President of the EU Commission. In a statement on the situation in Kashmir, she said, "The European Union supports a bilateral political solution between India and Pakistan over Kashmir, which remains the only way to solve a long-lasting dispute that causes instability and insecurity in the region." Czaputowicz stressed that as a non-permanent member of the Security Council, "Poland stands ready, if needed, to engage" in preventing actions in security situation.

"We hope that both countries can work out a mutually beneficially solution bilaterally," he said, adding that strained relations between India and Pakistan negatively affect the whole South Asia region and may lead to serious political, security and economic consequences. Czaputowicz said he was "just informed” Tuesday morning that the Security Council received the letter from the Ambassador of Pakistan.

"I think that the Security Council will discuss that issue and take proper decision." When asked when will the Security Council meet to discuss the letter from Pakistan regarding Kashmir, Czaputowicz said "I don't know. Simply, I got the information about the letter. We'll see," he said, adding that the Polish Ambassador to the UN is "always here" and probably she will start consultations soon. Pakistan Yet to Respond to India's Proposal on Kartarpur Corridor.

UN Secretary General Antonio Guterres has also stressed on the Simla Agreement of 1972, a bilateral agreement between India and Pakistan that rejects third-party mediation in Kashmir. Guterres' spokesman Stephane Dujarric said at the daily press briefing last week that the Secretary General has been following the situation in Jammu and Kashmir "with concern and makes an appeal for maximum restraint."

The Secretary-General also "recalls the 1972 Agreement on bilateral relations between India and Pakistan, also known as the Simla Agreement, which states that the final status of Jammu and Kashmir is to be settled by peaceful means, in accordance with the Charter of the United Nations."