US Elections 2020 | Mike Pence, The Vice President: All You Need to Know About Donald Trump's Running Mate

Mark Pence the 48th Vice-President of the USA started his political career in 1988 on a Republican ticket. However after two consecutive defeat in 1988 ans 1990, he re-directed himself into hosting TV and Radio talk shows, Pence once again ran for the Congress and won in 2000. He became the governor of Indiana in 2013 and was chosen as his running mate by Trump in 2016. 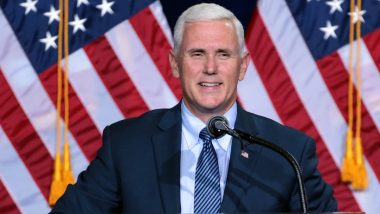 Mike Pence is the 48th Vice-President of the USA (Picture Credits: Wikimedia Commons)

Michael Richard Pence, better known as Mike Pence, is the incumbent and 48th Vice President of the United State of America. An Evangelical Christian, Pence has conformed to the Republican school of thought - which is rooted conservatism. Pence, analysts point out, has largely been away from the limelight in his tenure as the VP. However, he drew headlines for leading the White House coronavirus task force.

Pence shares a rather warm equation with President Trump and has earned the tag of being a loyal deputy. But before being selected as the VP, Pence had vocally criticised many of Trump's proposed policies including the travel ban on Muslims.

From losing back-to-back two Congress elections in 1988 and 1990 respectively to becoming the US's second-in command in 2016, Pence had a rather bumpy political journey. After the loss in 1990 Congressional bid, he changed re-directed himself to host radio and TV shows for a while.  Here is the all you need to know about Mark Pence's journey to the office of 48th vice-president of the USA.  US Elections 2020 | Joe Biden and Jill Biden: All You Need to Know About The Ex-Vice President and Former Second Lady.

Mike Pence was born on June 7, 1959, in Columbus, Indiana in a Irish Catholic family to Nancy and Edward Pence. His father was a US Army veteran who operated a series of gas station.  As a student, Pence volunteered for the Bartholomew County Democratic Party at Columbus North High School. In 1981, he graduated with a B.A (History) degree from Hanover College and in 1983 moved to Indianapolis to pursue higher studies at the Indiana University McKinney School of Law.

During his time in the Hanover College Pence became increasing devoted to Christianity.  It was during here, that he was set off as a 'born-again Evangelical Catholic.' He was raised a Democrat by his family and grew up idolizing former US President John F. Kennedy. In 1980 US Presidential Elections, despite voting for Jimmy Carter, he is said to have been greatly influenced by Republican Ronald Reagan. Being excessively inspired by the Republic Party, this born-gain Christian ditched his Democrat upbringing and became a proud Republican.

Pence first ran for the Congress in 1988 on a Republican ticket and was defeated by Democrat Phil Sharp. The history repeated itself, and Pence was again defeated by Sharp in his second Congress Elections in 1990. These initial defeat helped shaping Mike Pence political career to a huge extent. In the essay titled 'Confessions of a Negative Campaigner,' Pence confessed that he was disgusted by his own line of negative attacks on his opponents and vowed to undertake positive political campaigns.

From 1991 through 1993, Pence served as president of the Indiana Policy Review Foundation. In 1994 he started hosting a right-wing conservative radio show called 'The Mike Pence Show' where he referred himself as a 'Rush Limbaugh on decaf.' He soon branched out to the television. However, in 1999 he ended his shows on both the platforms.  US Presidential Election 2020 Candidate Profile: Facts About Donald Trump, the 45th US President, And First Lady Melania Trump.

In 2000, Pence once again an for the Congress, under the slogan, "a Christian, a conservative and a Republican, in that order," and won this time. He soon climbed up the Republican hierarchy and was made the head of Republican Study Committee in 2005 and the Republican Conference Chairman in 2008. Pence was finally elected as the Governor of Indiana in 2013 and served the office till 2017.  During the US Presidential Elections 2016, Donald Trump chose him as his running-mate. Mike Pence was sworn  as Vice-President of the USA on July 20, 2017.

His tenure as the US Vice-President has more or less been a smooth run, expect for a few controversies for his views on abortions and LGBTQ rights, owing to his staunch Christian beliefs. Pence is re-running for the Vice-President Office in the US presidential Elections 2020.

(The above story first appeared on LatestLY on Oct 31, 2020 09:14 PM IST. For more news and updates on politics, world, sports, entertainment and lifestyle, log on to our website latestly.com).