US: Mid-Air Collision of Two Planes in Idaho Claims At Least 8 Lives 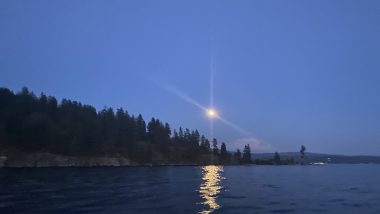 Washington, July 6: A tragic accident was reported on Sunday in Idaho province of the United States, leading to the death of at least eight persons. Two privately operated airplanes collided in mid-air, leading to the demise of all onboard. The aerial crash took place over the Coeur d'Alene Lake in Idaho, said reports citing officials.

The bodies of two victims were recovered, by the time preliminary reports emerged. Six others, including adult and children, are considered to be killed in the air crash. Plane Crash in US: Five People Including Four Family Members Travelling to a Funeral Killed in Georgia.

Kootenai County Sheriff's Office Lt. Ryan Higgins, while speaking to CNN, said the accident took place at around 2:20 pm. None of the victims are expected to have survived, he added.

The sonar team of Idaho region has detected the planes to have sunk at a depth of 127 metres in the lake, Higgins said, adding that the crashed aircrafts and remaining bodies may be recovered by Monday or Tuesday.

One of the aircraft involved in the collision was a Cessna 206, Federal Aviation Administration spokesman Ian Gregor. The cause of collision was yet to be ascertained, and is likely to be a subject of investigation for the aviation regulator department.

(The above story first appeared on LatestLY on Jul 06, 2020 12:12 PM IST. For more news and updates on politics, world, sports, entertainment and lifestyle, log on to our website latestly.com).