Meanwhile, as nations around the world rely heavily on the healthcare workers in the fight against the deadly virus, Pakistan has been arresting doctors and healthcare workers. The number of confirmed coronavirus cases in Pakistan on Monday soared past 4,000 with the maximum number of COVID-19 cases being reported from Punjab. 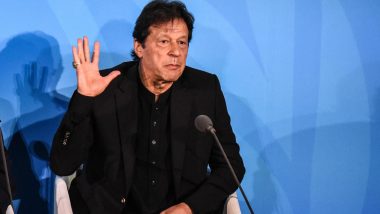 Quetta, April 8: A day after doctors and medical personnel were lathi-charged and arrested in Pakistan for demanding Personal Protective Equipment (PPE) kits to fight coronavirus, Prime Minister Imran Khan expressed his dismay over the police action. The Imran Khan-led government has been criticised by several Pakistan leaders for failing to take timely action against Balochistan police forces who lathi-charged the doctors, Dawn reported.

The prime minister has expressed his dismay on the arrests of protesting doctors in Quetta, almost a day after police detained the frontline warriors against COVID-19 for demanding PPE kits and other medical equipment. According to Pakistan's Young Doctors Association (YDA) president Dr Yasir Achakzai, YDA and paramedical staff in Balochistan staged a protest on Monday against the unavailability of PPEs in their fight against coronavirus. Coronavirus Outbreak: Pakistani Doctors Arrested for Protesting Against Unavailability of Protective Gear in Government Hospitals.

They were later baton-charged by security forces and dozens of them were arrested near Red Zone, he alleged. Razzaq Cheema, Quetta deputy inspector general police, confirmed that police had arrested dozens of protesting doctors. Following this, YDA announced the withdrawal of services from government hospitals.

"We suspend all our services following high-handedness of police," Achakzai said. Within hours of the incident, Pakistani leaders started condemning Imran Khan's government for the arrests and showed sympathy towards the arrested doctors. Balochistan Chief Minister Jam Kamal Khan met the YDA doctors and assured them of his government's full cooperation in their battle against COVID-19 and in meeting their demands.

He tweeted, "I personally gave a sitting and met YDA doctors...and assured we shall solve their contract employees' issue, new posts have been advertised. Assured them we are serious in solving matters. But, it's inappropriate to lock MS offices and put locks on them.

"PML-N president Shehbaz Sharif condemned the police behaviour.He tweeted, "Strongly condemn the torture and arrest of the doctors and paramedics in Quetta. It belies logic how those at the front lines of the fight for our collective well-being and survival are being humiliated merely for demanding protective kits. Truly shameful behaviour!"

Meanwhile, as nations around the world rely heavily on the healthcare workers in the fight against the deadly virus, Pakistan has been arresting doctors and healthcare workers. The number of confirmed coronavirus cases in Pakistan on Monday soared past 4,000 with the maximum number of COVID-19 cases being reported from Punjab.

While Punjab has reported 2,004 cases, Sindh reported 986. Khyber-Pakhtunkhwa had 500, Balochistan 206, Gilgit-Baltistan 211, Islamabad 83, and 19 cases were reported in Pakistan-occupied Kashmir (PoK).