In Goa, we'll contest elections on more than 20 seats. We may form an alliance in Goa. For both elections, preparations are underway," said Sanjay Raut. 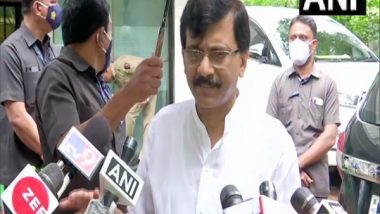 "We (Shiv Sena) will contest the elections in Uttar Pradesh on around 100 seats (total 403 seats), which will take place next year. In Goa, we'll contest elections on more than 20 seats. We may form an alliance in Goa. For both elections, preparations are underway," said Sanjay Raut. Also Read | Kerala Shocker: Woman Hacks Husband To Death In Thiruvananthapuram’s Amboori; Arrested.

The Uttar Pradesh Assembly elections are scheduled to take place early next year. "Gujarat Chief Minister Vijay Rupani resigned yesterday. It is an internal matter of the Bharatiya Janata Party (BJP). A national party that is in power at the centre has the right to change the Chief Minister of the concerned state. Also Read | Tamil Nadu: 19-Year-Old Aspirant Found Dead on NEET Exam Morning in Salem.

They changed CMs of Uttarakhand, Karnataka and now it's Gujarat. This might be a political strategy for the upcoming elections," stated Raut.

Rupani resigned from his post on Saturday. His resignation comes a year before the assembly elections in the state. He took charge as the Chief Minister of Gujarat on 7 August 2016. He currently represents Gujarat's Rajkot West as MLA.