The "spiritual guru" of NSE's former chief Chitra Ramkrishna took interest in her hairstyle, shared songs with her and went on a vacation with her to Seychelles to "chill" out, according to a Sebi order. 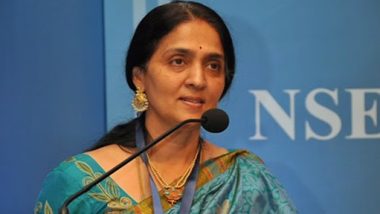 New Delhi, February 14: The "spiritual guru" of NSE's former chief Chitra Ramkrishna took interest in her hairstyle, shared songs with her and went on a vacation with her to Seychelles to "chill" out, according to a Sebi order.

This was contradictory to Ramkrishna's statement given to markets regulator Sebi, whereby she said her spiritual guru is a "siddha-purusha" or "paramhansa" who did not have physical persona and could materialize at his will.

The spiritual guru, who Ramkrishna claimed was dwelling in Himalayan ranges, guided her on personal and professional matters for 20 years. This was revealed in a Sebi's order passed on Friday against Ramkrishna, who was the MD and CEO of NSE, and others in a matter of governance lapses in the appointment of Anand Subramanian as chief strategic advisor and his re-designation as group operating officer and advisor to MD.

"Without unnecessarily going into the details of each email, it is evident that the unknown person is a physical being and has gone on vacations with the Noticee no. 1 (Ramkrishna) to “chill”, Sebi said. Ramkrishna, who was the managing director and CEO of NSE from April 2013 to December 2016, referred the Himalayan yogi as "Sironmani".

In her statement given in April, 2018 before Sebi, she submitted to have attended the meeting with the "unknown person" at the Swamimalai temple in Delhi and also met him on occasions in holy places. The e-mail exchanged between spiritual guru and Ramkrishna showed that he took interest in her personal appearance too.

In an e-mail to Ramkrishna on February 18, 2015 the unknown person mentioned, "Today you are looking Awesome. You must learn different ways to platt your hair which will make your looks interesting and appealing!! Just a free advice, I know you will grab this. Keep March mid a little free."

In another email to the NSE's former boss on February 17, 2015, the Himalayan yogi wrote, "keep bags ready I am planning a travel to Seychelles next month, will try if you can come with me, before Kanchan (Subramanian) goes to London with Kaanchana and Barghava and you to New Zealand with two children.

"HK is a preferred transit or Singapore for onward journey. In case you need help pi let me know Seshu will do the needful. If you know swimming then we could enjoy a sea bath in Seychelles and rest in the beach. I am asking my tour operator to connect with Kanchan for all of our tickets," as per the email.

In another email on September 16, 2015, the spiritual guru asked her about a song: "Did you hear that Makara Kundala song I sent? You must hear the resonance of that iterations. I am happy to see cheer, on your face and absolutely from your heart. I did rejoice the time yesterday with you. These small things you did for yourself make you feel younger and energetic."