Pep Guardiola After Manchester City Win EPL 2020-21 Title, Says 'This Has Been a Season Like No Other, Proud to Be the Manager Here'

Manchester City currently has 80 points from 35 matches while United has 70. 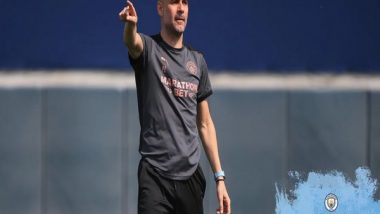 Manchester, May 12: Manchester City has won its third Premier League title in the last four years and what makes this victory stand out for manager Pep Guardiola is the way the team battled it out not just on the pitch, but also off it against the coronavirus pandemic.

And Guardiola hopes to celebrate with the fans once normalcy returns. "It is so important to say a huge thank to all our fans. In our toughest moments, we couldn't hear the crowd get behind us as usual, but we know they are with us everywhere we go and that has lifted us. "I promise them we sense their love, we appreciate it and we could not have done what we have done without it. I hope we can all celebrate together one day not too far away. It has been such a hard year for so many people. This one is really for our fans and for Colin Bell and all his family," he told mancity.com.

Even if City loses all its three fixtures and United wins its remaining matches, the side would still be able to reach just 79 points, one point behind City. Commenting on the journey this season, Guardiola said: "This has been a season and a Premier League title like no other. This was the hardest one. We will always remember this season for the way that we won. I am so proud to be the manager here and of this group of players. "They are so special. To come through this season -- with all the restrictions and difficulties we've faced -- and show the consistency we have is remarkable. It is relentless.

Every single day, they are there, fighting for success, trying always to be better. They have been so, so resilient. "That is equally true of each and every member of our backroom staff, who have worked tirelessly behind the scenes to ensure that our players are fully equipped to take on the unexpected challenges and new routines throughout such a turbulent year. Manchester City Win EPL 2020-21 Title As Leicester City Beat Manchester United 2-1.

"Not forgetting, of course, all of the staff across our organisation who work to make this club the success it is. Whether that's been from the offices at CFA or working from home, the efforts of every employee in such trying circumstances have contributed to this achievement." The manager went on to add that winning the Premier League is always the team's primary objective at the start of a season.

"At the start of every season, the Premier League is the most important title for us. This is the one where you have to be there every three days, playing all your rivals home and away. Only by being the very best, week in week out, can you win this competition. It is a huge success," he said.