Hollywood legend Sean Connery's predecessors in the James Bond franchise, Pierce Brosnan and Daniel Craig, remembered the original 007 as an acting giant who cast a long shadow of "cinematic splendor" that will live on forever. 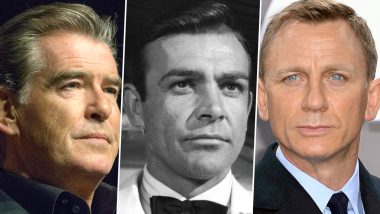 Hollywood legend Sean Connery's predecessors in the James Bond franchise, Pierce Brosnan and Daniel Craig, remembered the original 007 as an acting giant who cast a long shadow of "cinematic splendor" that will live on forever. The Legendary Scottish star, who became a global sensation as the first James Bond and featured in a string of cult hits in his five-decade-long career, died on Friday at the age of 90. According to BBC, the actor passed away overnight in his sleep while in the Bahamas. He had been unwell for quite some time. Sean Connery Dies at 90: From James Bond to Henry Jones Sr, 15 Most Iconic Roles of Hollywood Legend That the Movie Fans Will Continue to Cherish!

“Sir Sean Connery, you were my greatest James Bond as a boy, and as a man who became James Bond himself. You cast a long shadow of cinematic splendor that will live on forever," Brosnan wrote on Instagram. The 67-year-old star, who played the suave British spy in four movies between 1995 to 2002, said all the actors who followed Connery's "iconic foot steps", looked up to him with reverence and admiration. "Each man in his turn looked to you with reverence and admiration as we forged ahead with our own interpretations of the role. “You were mighty in every way, as an actor and as a man, and will remain so till the end of time. You were loved by the world, and will be missed. God bless, rest now, be at peace," he added. Sean Connery, the Original James Bond, Dies at 90, Abhishek Bachchan, Hugh Jackman And Others Mourn Loss of the Iconic Actor (View Tweets)

Connery made his acting debut in 1956 with BBC production of "Requiem for a Heavyweight", but his career breakthrough came when producers Albert Broccoli and Harry Saltzman roped him to play James Bond, the ficitional spy created by author Ian Fleming. He first played the role of 007 in 1962's "Dr No", which he followed up with "From Russia with Love" (1963), "Goldfinger" (1964), "Thunderball" (1965), "You Only Live Twice"(1967), "Diamonds Are Forever" (1971) and "Never Say Never Again"(1983). Craig, who currently plays the part and is looking forward to the release of 25th film in the franchise "No Time to Die", said Connery defined an era.

“It is with such sadness that I heard of the passing of one of the true greats of cinema. Sir Sean Connery will be remembered as Bond and so much more. "He defined an era and a style. The wit and charm he portrayed on screen could be measured in mega watts; he helped create the modern blockbuster," the actor said in a statement to Variety. The 52-year-old actor said the cinema icon will continue to influnece performers and filmmakers alike for years to come. "My thoughts are with his family and loved ones. Wherever he is, I hope there is a golf course," he concluded.

“It is with such sadness that I heard of the passing of one of the true greats of cinema. pic.twitter.com/McUcKuykR4

"No Time to Die" marks Craig's fifth and final film as Bond. Earlier, in a statement posted on Twitter, franchise producers Michael G. Wilson and Barbara Broccoli said they are "devastated" by Connery's death. "He was and shall always be remembered as the original James Bond whose indelible entrance into cinema history began when he announced those unforgettable words.  "'The name's Bond... James Bond' -- he revolutionised the world with his gritty and witty portrayal of the sexy and charismatic secret agent. He is undoubtedly largely responsible for the success of the film series and we shall be forever grateful to him," they said.