But it went ahead despite the ball barely rolling and water splashing up from the waterlogged pitch as the players ran. 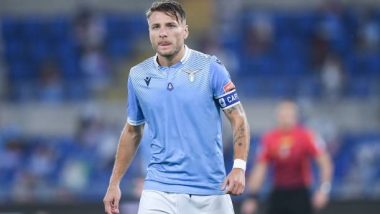 Milan, November 21: Ciro Immobile marked his recovery from the coronavirus with a goal as Lazio won 2-0 at last-place Crotone in Serie A on Saturday.

Juventus and Atalanta can go to within one point of Milan with wins against Cagliari and Spezia, respectively. Crotone remained bottom with just two points from its opening eight matches.

The match was at risk of being postponed after torrential downpours and flash flooding in the area. But it went ahead despite the ball barely rolling and water splashing up from the waterlogged pitch as the players ran. Also Read | Ronald Koeman Uncertain About Lionel Messi's Future in Barcelona, Says 'Nobody Knows What Will Happen'.

It was Immobile's first match in nearly three weeks after being ruled out with COVID-19, which also kept him out of Italy's three matches. Immobile had scored in his previous three matches before his layoff and he opened the scoring in the 21st minute with a diving header into the bottom left corner following a superb cross from Marco Parolo.

Correa doubled Lazio's lead in the 58th with a shot from a tight angle after dribbling past Crotone defender Pedro Pereira and going almost to the byline.

Comments
Tags:
AC Milan Ciro Immobile Crotone vs Lazio Lazio Lazio vs Crotone Serie A 2020
Comments
You might also like