IPL 2021: Chris Woakes May Miss The First Test Against New Zealand on June 2 at The Lord's if Delhi Capitals Reach IPL Final

England all-rounder Chris Woakes would opt to miss a Test at home should his IPL team Delhi Capitals make the league's final in May as "opportunities" like that won't come easy in his quest to be selected for this year's T20 World Cup in India. 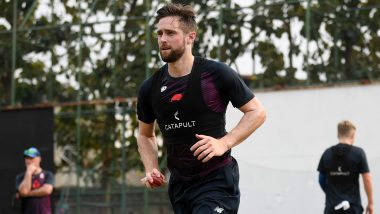 London, Mar 25: England all-rounder Chris Woakes would opt to miss a Test at home should his IPL team Delhi Capitals make the league's final in May as "opportunities" like that won't come easy in his quest to be selected for this year's T20 World Cup in India.

Woakes was retained by DC despite him pulling out of the last edition due to family reasons. He was included in the England squad for the Test series against India but went home after the third game as part of the team's rotation policy without playing a single game. Delhi Capitals Coach Ricky Ponting Shares Excitement About IPL 2021, Rishabh Pant, Axar Patel Respond.

Delhi had reached the IPL finals in UAE last year and if the team can repeat the show, Woakes may miss the first Test against New Zealand on June 2 at the Lord's. The IPL final is scheduled on May 30.

"If I'm not in the Delhi XI, I'll speak to Ricky (Ponting) and the powers-that-be. Of course I want to play at Lord's, my record there (27 wickets at 11 runs apiece, a career-best 137 with the bat) speaks for itself. But those Tests were arranged late," the 32-year-old told 'The Guardian'.

Woakes will be joining his Delhi teammates in Mumbai on Sunday ahead of the IPL beginning on April 9 in Chennai. He hasn't been a part of England's T20 squad since 2015.

"England want us to broaden our horizons in the IPL and, at this stage of my career, these opportunities won't keep coming up. If it means missing a Test, that unfortunately might be the case.

"The players are in an awkward position, though. This summer is big, especially with a Test series against India to follow."

Woakes said he eager to repay the faith that Delhi has shown in him.

"Delhi have been loyal to me and I want to repay that. It's my third season in the IPL overall (after spells with Kolkata and Bangalore) and I always come back a better cricketer," Woakes said.

Woakes said he is honing his death bowling skills and also working on his power-hitting to make it to the T20 World Cup squad to be held in India later in the year.

"I don't want to rule out the T20 World Cup at all, I still see myself as a three-format cricketer," he said.

"I'm looking to work on my variations, death bowling and explore some power-hitting options. Hopefully I can give Morgs (captain Eoin Morgan) and England a reminder of what I can do."

Talking about missing the chance to play against India in the Test series, Woakes said it was a bitter pill to swallow.

"In India, the balance of the team with two spinners made it tricky. But missing the pink-ball Test, that was a bit of a kick in the teeth. Four seamers and I still didn't get a look-in.

"That just about summed up my winter, really. And I feel I made strides in my last few Tests overseas. It's easy to get pigeonholed but I know I've improved here."

India would be touring England for a five-Test series starting August 4.