Pakistan Tehreek-e-Insaf (PTI) chief Prime Minister Imran Khan, who was ousted as prime minister through a no-confidence motion in April this year, gave the Shehbaz Sharif government a six-day deadline for announcing elections and dissolving assemblies warning that if the deadline is not met he would return to the capital with the "entire nation". 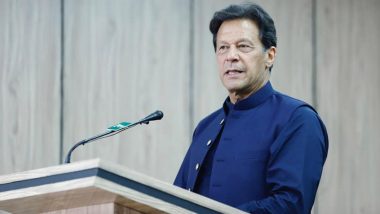 Islamabad, May 26: Pakistan Tehreek-e-Insaf (PTI) chief Prime Minister Imran Khan, who was ousted as prime minister through a no-confidence motion in April this year, gave the Shehbaz Sharif government a six-day deadline for announcing elections and dissolving assemblies warning that if the deadline is not met he would return to the capital with the "entire nation".

In the wake of this announcement by former Prime Minister Khan, the PTI supporters entered the Red Zone on Thursday morning. However, they were later dispersed after talks with police officials, reported Dawn. According to a statement issued by the Islamabad police spokesperson, Islamabad Inspector General of Police Dr Akbar Nasir Khan was also present at the site and protesters were being instructed to leave the Red Zone. Imran Khan Likely To Be Detained by Pakistan Government Amid Long March.

"I had decided that I will sit here until the government dissolves assemblies and announces elections, but of what I have seen in the past 24 hours, they (govt) are taking the nation towards anarchy," he said while addressing the protesters at Islamabad's 9th Avenue. Earlier, police in Pakistan fired tear gas and clashed with supporters of Pakistan Tehreek-e-Insaf (PTI) in the wee hours of Thursday as Imran Khan started reaching Islamabad to demand fresh elections.

Tension gripped the country as police and PTI workers clashed after authorities tried to block them from moving toward D-Chowk in the federal capital after Imran Khan warned his supporters would not vacate the area until a date for fresh polls was announced by the Shehbaz Sharif government. "It's 2.30 am at the D-Chowk and the shelling is continuing. God knows how many more rounds of shelling will they use before the arrival of Imran Khan," said Senator Aon Abbas Buppi.

Failing to control the growing unrest due to the protest march launched by Imran Khan, the Shehbaz Sharif government has been forced to call in the army to protect the Red Zone as former Pakistan Prime Minister and PTI chief entered Islamabad in the early hours of Thursday. Rights groups expressed deep concern at the highhandedness of law enforcement agencies in disrupting the PTI's march to Islamabad.

"We believe that all citizens and all political parties have every right to assemble and protest peacefully," the Human Rights Commission of Pakistan (HRCP) tweeted. Earlier, Prime Minister Shehbaz Sharif-led Pakistan Muslim League Nawaz (PML-N) government rejected the demands of ousted former prime minister and Pakistan Tehreek-e-Insaf (PTI) chief Imran Khan for holding re-elections in the country, and said that the government will complete its tenure.

PML-N and its allies announced that the current setup will complete its tenure till August 2023 and the general elections would be held at the stipulated time next year, reported Express Tribune quoting sources.