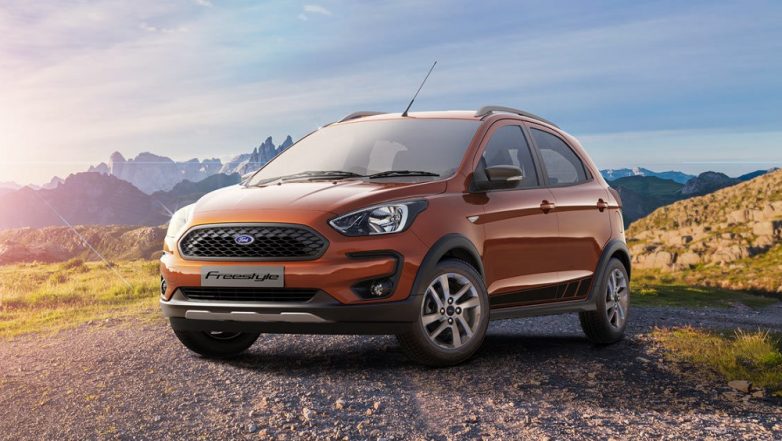 Ford India is all set to launch the new Freestyle Compact Utility Vehicle (CUV) in the Indian market tomorrow. The American car maker is looking to strengthen its product portfolio by introducing all-new Freestyle CUV which will be pitted against the likes of the Fiat Urban Cross, Toyota Etios Cross and Hyundai Active i20. Moreover, the company previously also initiated the e-bookings of the vehicle via Amazon India for just 100 units only. The new offering from Ford India will be positioned in between Figo and EcoSport. Read More: 2018 Ford EcoSport Titanium S to come with EcoBoost Engine; India Launch Imminent

The upcoming Freestyle CUV from the house of Ford India will be seen in 4 variants - Ambiente, Trend, Titanium and Titanium+. On the feature front, the new Ford Freestyle CUV will be loaded with touchscreen infotainment system, automatic headlamps, automatic climate control, rain sensing wipers and electric ORVMs to be seen on the selected variants only. In terms of safety, the Compact Utility Vehicle comes equipped with dual front airbags along with ABS & EBD as standard. Other standard fitments on the CUV across the lineup are seat belt reminder, high-speed warning and reverse parking sensors. Read Also: Ford Freestyle Online Bookings Commences via Amazon India; Expected Price, Launch Date, Specifications, Images and Other Details

On the mechanical front, the new Ford Freestyle comes with a choice of petrol as well as diesel options. The petrol engine is all-new 1.2-litre, 3-cylinder unit which can generate maximum power of 95 BHP with 120 Nm peak torque. The diesel unit, on the other hand, is the same 1.5-litre, 4-cylinder oil burner that does duty on the Figo hatchback which can generate 99 BHP of max power with peak torque of 215Nm. Both the engines come mated to a 5-speed manual gearbox, however, the company could introduce the automatic variant on the later stage. Read More: Ford Freestyle 2018 India Launch Imminent: Expected Price, Dimensions, Interior, Specs & Interior