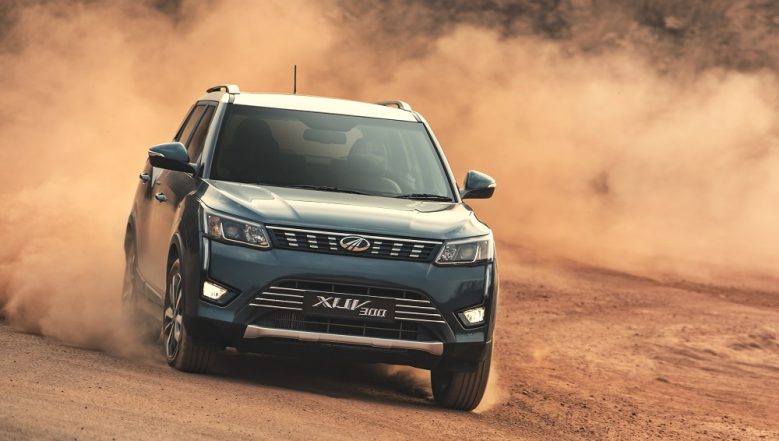 Mahindra & Mahindra, a leading SUV manufacturer has finally launched the highly awaited XUV300 in the Indian market at a starting price of Rs 7.9 lakh (ex-showroom India). Based on the SsangYong's X100 platform, the new Mahindra XUV300 is offered in 4 variants – W4, W6, W8 & W8 (O). The overall design of the SUV has been inspired from a cheetah that gives an imposing stance and styling appeal. The company has officially confirmed that it has already received around 4000 bookings for the SUV ahead the launch. Mahindra XUV300 Sub-Compact SUV India Launch Tomorrow; Likely To Be Priced Around 8 Lakh.

The SUV is built on the SsangYong's X100 platform, which also underpins SsangYong Tivoli. The SUV also carries some characters from the former, however, the company has ensured distinctive characters of the XUV300 by adding new suspension setup and all-new steering mechanism. Dimensionally, the new Mahindra XUV300 measure 3990mm in length, 1820mm in width and 1620mm in height and the wheelbase stands at 2620mm. The ground clearance of the SUV measures 180mm.

Coming to the interiors, the SUV sports off-white and black interiors giving an upmarket appeal. Moreover, the materials are straight away borrowed from Mahindra Marazzo. As far as the features are concerned, the Mahindra XUV300 gets a 7-inch touchscreen infotainment system with Apple CarPlay and Android Auto compatibility, auto-climate control, steering mounted controls, start-stop engine, sunroof, cruise control and more. Coming to the safety front, the sub-compact SUV features ABS with EBD, rear parking sensors as standard. Top 5 Cars Launched in India During Year 2018.

On the specification front, the new Mahindra XUV300 SUV comes in petrol and diesel versions. The petrol unit is a 1.2-litre G80 turbocharged unit that makes 110 bhp of max power @ 5000 rpm with peak torque of 200 Nm. The 1.5-litre oil burner is capable of generating 115 bhp @ 3750 rpm with 300 Nm of peak torque. Both the engines are mated to a 6-speed manual gearbox as standard. The AMT version of the SUV will be introduced on the later stage.

Launched at a price point of Rs 7.9 lakh (ex-showroom India), the new Mahindra XUV300 will take on Maruti Suzuki Vitara Brezza and Tata Nexon in the sub-compact SUV segment. Here are the variant wise prices of the SUV - All Prices Ex-showroom India.