Royal Enfield, the Chennai-based two-wheeler manufacturer has announced that it will officially launch the much-awaited Royal Enfield Meteor 350cc motorcycle in India on November 6, 2020. 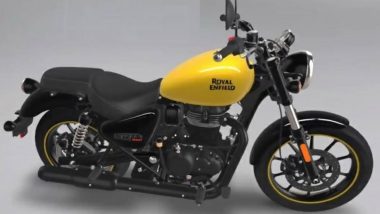 Royal Enfield, the Chennai-based two-wheeler manufacturer has announced that it will officially launch the much-awaited Royal Enfield Meteor 350cc motorcycle in India on November 6, 2020. The launch of the highly anticipated bike was delayed multiple times in the past, owing to the novel coronavirus pandemic. The upcoming motorcycle was also seen amid testing on the public roads a few months back. A few days back, Meteor 350 bike's features & specifications were leaked online. Royal Enfield Meteor 350 Motorcycle Likely To Be Launched In India Next Month: Report.

The Royal Enfield Meteor 350cc is likely to come in three variants - Fireball, Stellar & Supernova. The upcoming bike will get a standard Bluetooth enabled 'Tripper Navigation' system for Royal Enfield bikes. As the name suggests, the upcoming bike is expected to come with a new 350cc, single-cylinder, air-cooled, long-stroke engine. According to the reports, the engine will produce 20.2 bhp of power & 27 Nm of peak torque. In addition to this, there could be a new transmission with a smoother & lighter clutch action. Coupled with a 5-speed gearbox, the bike is expected to offer better refinement as well.

Other features may include a large windscreen, engine guard, better footpegs, a digital-analogue instrument cluster with smartphone connectivity & turn-by-turn navigation assistance. Coming to the pricing, Royal Enfield is expected to be priced in between Rs 1.60 lakh to Rs 1.75 lakh (Ex-showroom).

(The above story first appeared on LatestLY on Oct 22, 2020 06:15 PM IST. For more news and updates on politics, world, sports, entertainment and lifestyle, log on to our website latestly.com).