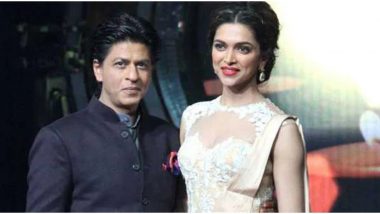 Deepika Padukone is certainly on a signing spree. The actress who recently flew to Goa to start shooting for Shakun Batra's next with Siddhant Chaturvedi is also expected to star with Shah Rukh Khan in his next. Yes, we did read reports of her collaborating with King Khan in YRF's Pathan but recent development suggests her collaboration is for Atlee's next. The actor who briefly went missing from Bollywood post Zero's debacle at the box office is gearing to announce his multiple projects - one with Rajkumar Hirani, another one with YRF and finally with South director Atlee. And rumours are rife about Deepika coming on board on one of these projects.

As per reports in Filmfare, Deepika recently heard Atlee's narration and decided to be a part of his big project with SRK. The film will be an outright commercial and DP has loved its script. If things finally fall in place, this would mark her fourth project with King Khan after Om Shanti Om, Happy New Year and Chennai Express. Their previous collaborations have always been a huge success at the box office and here's hoping this one turns out to be equally successful. Shah Rukh Khan’s Birthday Bash Sees Filmmaker Atlee and His Wife, Is This a Confirmation That the Actor-Director Are Indeed Collaborating? (See Pics).

Although, it's unclear if Deepika will work with Shah Rukh in Sanki (Atlee's) or YRF's Pathan or maybe both. The official confirmation on the same is awaited and industry whisper suggests YRF's announcement will be made on Yash Chopra's birth anniversary on September 27. John Abraham has been apparently roped in to lock horns with SRK in their next production and his inclusion has certainly taken our excitement a notch higher.

(The above story first appeared on LatestLY on Sep 12, 2020 05:44 PM IST. For more news and updates on politics, world, sports, entertainment and lifestyle, log on to our website latestly.com).