Amitabh Bachchan Birthday Special: 7 Movies Of The Actor In The Last Decade That Are Simply Fantastic

On Amitabh Bachchan's 78th birthday, we list down seven movies of the actor in the last decade which no one else could have done. 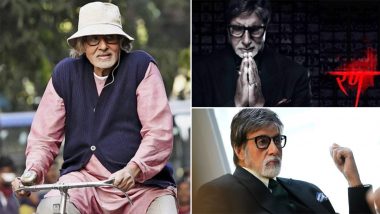 Amitabh Bachchan turns 78 today and is still one of the busiest stars in the industry. Many say your age decides how long you survive in this industry but AB is an exception. Many of his colleagues or peers who started along with him aren't as busy with work as he is. He is also one of the luckiest guys in the industry as his fans have always been kind to him. If they starved for him after the Coolie incident praying for his life, they also gave him indicators that he needs to buckle up his socks. That's when his second innings began which is still going strong. Amitabh Bachchan in Prabhas 21! From Amrithadhare to Sye Raa Narasimha Reddy, List of South Films The Legendary Actor Has Worked In Before

Amitabh Bachchan is perhaps one such actor who managed to be a bigger hit on Television as well. Be it KBC or a mainstream star making a move on fictional TV Yudh, AB has done it all and got a lot of praise as well. If you ask me, his movies now are so much better than what he used to do in the 70s. To prove our point, we have listed seven such films of this mighty actor in the last decade which simply majestic.

Although Ram Gopal Varma deserves a lot of applause this film that completely defines how media can manipulate democracy and is highly relatable today than it was back then, Bachchan as the ethical CEO of a news channel wronged by his own son was simply heart-breaking. The last scene where he admits to all wrong-doings left everyone with teary eyes. You need a lot of restrain as an actor to do such scenes without being overly dramatic.

The education system in India is one of the most lucrative businesses. How the caste system can put a brake in someone's education is spectacularly depicted by the movie. Bachchan played the righteous Principal who uses the only weapon to fight against the bullies - teaching.

The voice that was rejected by All India Radio once, became the heartbeat of the nation. That's exactly how this movie opens with AB being Dhanush's voice. The movie needed a lot more work than it got but Bachchan was bang on as the man with the voice!

Every Bengali person will identify with Bhashkor Banerjee from Piku. The mannerisms, the incessant potty talks, the possessive behaviour, and melodrama. It was so easy to be irritated by him but when he died in the movie, we were shattered.

The reason Pink has become one of the best movies in the last decade is it said everything a girl wants to say to the society where men are bred into a superiority complex. Bachchan as a lawyer who not only fights the case but his own demons as well made for a wonderful watch. We doubt there could be anyone who would have done such a good job with Deepak Sehgal.

Rishi Kapoor and Amitabh Bachchan came together for a movie. Just them and good old 80s memories. Bachchan's drive to live even after being 100 years old in the film will steal your heart.

A heart-racing thriller of last year had Amitabh Bachchan play a lawyer who tries to find out if Taapsee Pannu is telling the truth or lying. In a course of an evening, a lot of secrets tumble out and also the fact that Bachchan can do just about anything on the screen.

(The above story first appeared on LatestLY on Oct 11, 2020 12:00 AM IST. For more news and updates on politics, world, sports, entertainment and lifestyle, log on to our website latestly.com).