Bhool Bhulaiyaa 2 released in theatres on May 20. The film is helmed by Anees Bazmee and produced by Bhushan Kumar, Murad Khetani, Krishan Kumar under the banners of T-Series and Cine 1 Studios. 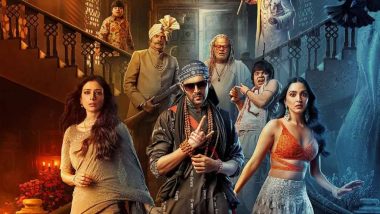 Kartik Aaryan, Kiara Advani, Tabu-starrer Bhool Bhulaiyaa 2 released in theatres today (May 20). Sequel to 2017 movie of the same, there's a lot of expectations attached to this horror comedy. The flick's story is set within the sprawling halls of a haveli. Having said that, critics who have watched the special screening/fdfs of BB 2 have already penned their heart about the Anees Bazmee movie, and it looks positive. P.S: all have loved Tabu's performance. Check out the review roundup of Bhool Bhulaiyaa 2 below. Bhool Bhulaiyaa 2 Movie Review: A Kartik Aaryan Show Trapped in a Spooky Comedy That's Neither Amuses Nor Scares! (LatestLY Exclusive).

TOI: "Bhool Bhulaiyaa 2’ is an agglomeration of grief and the grieving, a desi (more gleeful) answer to the old adage that life is, indeed, ‘the biggest tragedy’ of all—which navigates black magic and prods along an even darker subject: human nature—and it sticks for the most part, and the bits that don’t, they must be lost in the labyrinth that is life."

DNA: "Bhool Bhulaiyya 2 has the potential to charm the audiences back to theatres for the mainstream Hindi cinema. It’s just that they need to take a horror-comedy at its face value and not what they thought it would be in their minds. " Bhool Bhulaiyaa 2: Did You Know The Theme Music Of Kartik Aaryan’s Film Is Copied From JTL’s K-Pop Song ‘My Lecon’? (Watch Video).

Bollywood Life: "Despite some narrative lapses during the climax and its slightly sour aftertaste, Bhool Bhulaiyaa 2 is a very funny, effectively chilling horror comedy, boasting a firecracker Kartik Aaryan in red-hot form, backed by the veteran Tabu doing what she does best."

India Today: "For Kartik Aaryan fans, Bhool Bhulaiyaa 2 has all the masala and makings to satiate their taste buds. It’s funny in places, tries to be scary most of the time, but like its title, its efforts get somewhere lost in a maze."

So, after reading the above reviews, are you watching Bhool Bhulaiyaa 2 tonight? Tell us in the comment section below.

(The above story first appeared on LatestLY on May 20, 2022 10:05 AM IST. For more news and updates on politics, world, sports, entertainment and lifestyle, log on to our website latestly.com).