Brahmastra is the upcoming action fantasy drama that is helmed by Ayan Mukerji. Starring Ranbir Kapoor, Alia Bhatt and Amitabh Bachchan in the lead, the film has already seen a lot of delays. 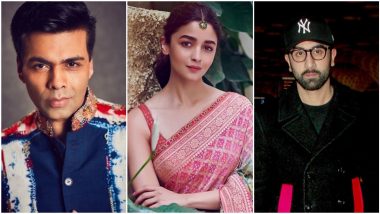 Brahmastra is the upcoming action fantasy drama that is helmed by Ayan Mukerji. Starring Ranbir Kapoor, Alia Bhatt and Amitabh Bachchan in the lead, the film has already seen a lot of delays. Brahmastra was scheduled to hit the big screens in August 2019 but then was delayed to Christmas 2019, then it was again postponed to summer this year as the VFX work wasn’t completed. However, even that couldn’t happen. Then it was stated that Brahmastra will released on December 4, 2020. Now will this movie be getting a theatrical release or will it be premiered on an OTT platform? Brahmastra: A Song From Ranbir Kapoor And Alia Bhatt Starrer Still Left To Be Shot (Read Details).

In the wake of coronavirus outbreak, the theatres in the country and in many other regions across the globe had to be closed down. It is after eight-months the theatres in India, after being permitted by respective state governments, have reopened with 50% capacity. Now the buzz is Dharma Productions honcho Karan Johar was asked by a streaming to release the film online.

About it a source was quoted as saying, “Disney+ Hotstar has now asked Fox Star Studios if they can hand over Brahmastra for their streaming platform. What it means is, Disney+ Hotstar wants Brahmastra to bypass theatrical release and arrive on its platform directly. They feel Brahmastra is a keenly awaited biggie and if it gets premiered on their platform, it'll fetch them record streams,” reports Bollywood Hungama. The source also mentioned, “Producer Karan Johar, however, has not shown interest. He believes that the VFX heavy, grand film would be best enjoyed in cinemas.” Brahmastra: Here’s What Ayan Mukerji Did to Avoid Footages of Ranbir Kapoor – Alia Bhatt Starrer from Being Leaked.

Brahmastra is produced under the banners of Fox Star Studios and Dharma Productions. The makers are yet to issue an official statement about the release plans of this much-awaited film.

(The above story first appeared on LatestLY on Nov 24, 2020 09:57 AM IST. For more news and updates on politics, world, sports, entertainment and lifestyle, log on to our website latestly.com).