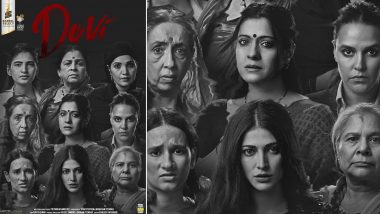 The recently released short film, Devi is in a plagiarism row now. The film stars Kajol, Neha Dhupia, Neena Kulkarni, Shruti Haasan, Mukta Barve, Shivani Raghuvanshi, Sandhya Mhatre, Rama Joshi and Rashaswini Dayam in the lead. The story revolves around the molestation and sexual abuse against women. However, many of them pointed out the film has uncanny resemblance with Abhishek Rai's short film FOUR. Now, Abhishek has responded to this controversy and also hinted towards taking a legal action against Devi director, Priyanka Banerjee and team. Devi Review: Kajol, Neha Dhupia, Shruti Haasan's Short Film Will Make You Question the Society that You Live in.

In his chat with India Today, he said, "I tried to contact Priyanka Banerjee (director of Devi) through Instagram, seeking some explanation. I got no response from her or any of the makers. Then I reached out to people on Twitter and Facebook and shared the link of my film so that they can themselves spot the similarities."

He further adds, "They should have, at least, notified me about the film. I deserve some credit or an acknowledgement for Devi. To be honest, now I need a public apology. We are waiting for their response, we really want to listen to their side. We will move ahead legally with the support of our college if they don't give us an explanation."

FOUR revolves around cases of Nirbhaya, Bhanwari Devi, and the Kathua rape victim. The set up is same as Devi and now the response from the makers of Devi is awaited.

(The above story first appeared on LatestLY on Mar 09, 2020 08:33 PM IST. For more news and updates on politics, world, sports, entertainment and lifestyle, log on to our website latestly.com).