Sushant Singh Rajput and Sanjana Sanghi's film premiered on Disney+Hotstar on July 24 at 7.30 PM IST and has given the streaming platform it's biggest opening ever. Read on. 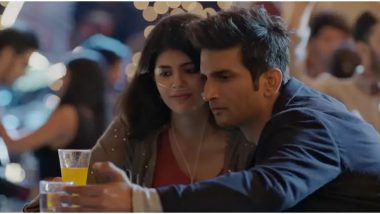 Sushant Singh Rajput and Sanjana Sanghi's film premiered on Disney+Hotstar on July 24 at 7.30 PM IST. As soon as the movie released online, fans, as well as celebs, started pouring in their emotions. Also, in less than 24 hours the film became the highest-rated Hindi film ever on IMDb with 9.8 ratings out of 10. Well, if that was not enough the movie also brought in a piece of good news for the streaming platform as it has registered the biggest ever opening for Disney+Hotstar. That's huge and indeed super in this current scenario where digital is the new normal. 'It’s Not Seri,' Kriti Sanon Pours Her Heart Out After Watching Sushant Singh Rajput's Last Film Dil Bechara (View Post).

Disney+ Hotstar announced the news on the micro-blogging site. "A film that will always be etched in the hearts of all Bollywood fans. Your love has made Dil Bechara the biggest movie opening. Ever," wrote the official Twitter handle of Disney+ Hotstar post the big premiere. Well, the buzz around Dil Bechara is not at all surprising considering it's the late actor's last movie. Sushant Singh Rajput Demise: Karan Johar's Manager, Mahesh Bhatt to Be Called For Questioning By Mumbai Police.

A film that will always be etched in the hearts of all Bollywood fans. Your love has made Dil Bechara the biggest movie opening. Ever. #DisneyPlusHotstar #Lovebreaksrecords#DilBechara #DisneyPlusHotstarMultiplex pic.twitter.com/dwrnmumjVd

Dil Bechara marks the directorial debut of casting director Mukesh Chhabra. The movie is based on Hollywood hit, The Fault In Our Stars, which was adapted by John Green's bestselling book of the same name. The story of the movie revolves around cancer-stricken lovebirds Sushant (Manny) and Sanjana (Kizzie). Click here to check out the film's full review. Stay tuned!

(The above story first appeared on LatestLY on Jul 26, 2020 05:24 PM IST. For more news and updates on politics, world, sports, entertainment and lifestyle, log on to our website latestly.com).