Dil Dhadakne Do: Did You Know Anil Kapoor ‘Almost Killed’ Rahul Bose During the Climax Scene of the Film?

Anil narrates the whole incident and talks about how Rahul then gets up in the scene and asks Priyanka to sort things out. When she refuses, he starts to shut at her. Seeing this Anil gets up and pins him on the wall by his neck. 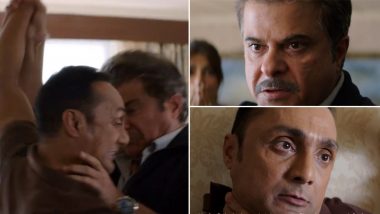 Dil Dhadakne Do is still one of the most entertaining family dramas ever made in Bollywood history. Starring Anil Kapoor, Priyanka Chopra, Shefali Shah, Ranveer Singh, Anushka Sharma, Rahul Bose and Zarina Wahab, the film was relatable to the audience and they showered immense love on the film. The film's song also became quite popular amongst the audience and its tranks like "Gallan Goodiyan" is still played during parties for people to shake a leg on. The film was a special honour to all the crazy families around our country and the actors had a blast on the sets too. 5 Years of Dil Dhadakne Do! Ranveer Singh Shares a Heartthrob Selfie From the Sets of the Film.

Anil Kapoor decided to share some of these memories through a special video. On the episodes of Tiger Baby's Off The Record with Anil Kapoor, the actor recalled the climax scene of the film and revealed how he 'almost killed' Rahul Bose in that particular scene. The portion that we are talking about had almost the entire lead cast of the film in presence including Priyanka, Shefali Shah, Ranveer Singh, Rahul Bose and Zarina Wahab. They are talking about how Priyanka is an inconsiderate wife and daughter-in-law. Ranveer mocks Zarina by saying that she should cut her hand with a proper knife instead of a butter knife and the drama continues.

Anil narrates the whole incident and talks about how Rahul then gets up in the scene and asks Priyanka to sort things out. When she refuses, he starts to shut at her. Seeing this Anil gets up and pins him on the wall by his neck. Anil revealed that he would have killed Rahul in the scene because he had that much anger in him built because of the situation. He revealed that he was looking forward to shooting this scene and it was a different experience when it actually happened.

Anil was supposed to pin Rahul to the wall, saying, "Tera haath ukhed ke rakh doonga (I will rip your hand out)." but instead of that Anil found a wire and went on to strangle Rahu. He told that this portion was not a part of the scene and the crew members had to be stop him and remind him that it was just a shoot and not a real situation. The actor added this was his favourite moment during the shooting of the film where he turns to his daughter Priyanka and apologises to her. Anil Kapoor Recalls 'memories with Best People' as 'Dil Dhadakne Do' Turns Five.

Meanwhile, on the work front, Anil was last seen in Anurag Kashyap's AK Vs AK, which streamed on Netflix. The comedy-thriller also featured Sonam Kapoor. The actor will be next seen in Raj Mehta's directorial Jug Jugg Jeeyo along with Varun Dhawan, Kiara Advani, and Neetu Singh in lead roles.

Besides this, he also has Bhushan Kumar, Sandeep Reddy Vanga, and Murad Khetani's ANIMAL with Ranbir Kapoor and Bobby Deol in the pipeline.

(The above story first appeared on LatestLY on Feb 28, 2021 07:29 PM IST. For more news and updates on politics, world, sports, entertainment and lifestyle, log on to our website latestly.com).