Heropanti 2 is a Bollywood action-thriller that is directed by Ahmed Khan and written by Rajat Arora. Produced by Sajid Nadiadwala, the movie stars Tiger Shroff, Tara Sutaria, Nawazuddin Siddiqui and Amrita Singh. Heropanti 2 is releasing in theatres on April 29. 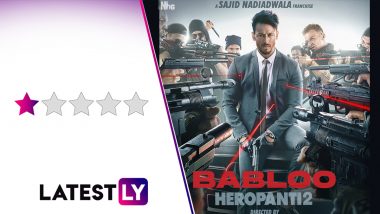 Heropanti 2 Movie Review: The opening scene of Heropanti 2 introduces us to Laila (Nawazuddin Siddiqui), a gay mafioso boss with a penchant for magic. Soon after he kills a mini-boss in his cartel in a sequence similar to Joker's 'You wanna see a magic trick' scene from The Dark Knight. Needless to say, I lost my shite there. I should have guessed that this is the beginning of my woes as both a viewer and a reviewer, for Ahmed Khan's new film, co-starring Tiger Shroff and Tara Sutaria, keeps on piling one inanity after another in this merciless excuse to undermine its dashing male lead's action prowess and our collective intelligence. Heropanti 2: Esha Gupta and Tiger Shroff’s Steamy and Fun Performance on Whistle Baja 2.0 Song Is Must-See (Watch Video).

Okay, so after Nawazuddin's completely hammy intro, we go to Yorkshire to meet Tiger Shroff's character RJ (or was it Archie, I didn't really get it), who stays there with his mother (Amrita Singh). For his mother, RJ is an innocent, naive boy who doesn't retaliate when bullies pick up on him. Of course, within 5 minutes we find out that he is actually Babloo, a hacker who is hiding from Laila's cartel with the help of his CBI boss Khan (Zakir Hussain). If you have to drop that 'bomb' within such a short notice, why even bother with the charade?

Oh wait, that only happened because we get to meet Inaaya (Tara Sutaria). I am not sure what she does professionally, is she an influencer or a model or a businessman, but the woman is annoying as hell! The little interest I had in Heropanti 2 is brought crashing down by how effing irksome this character is. Inaaya is so bad, that I now have a newfound admiration for what Kareena did with Poo in K3G. In the end, I suspect even the makers were tired of her screeching and preening that they brought in the heroine of the first Heropanti, Kriti Sanon, to dance with Tiger in the final song of the movie. Heropanti 2 Song Whistle Baja 2.0: Tiger Shroff and Kriti Sanon Will Charm You With Their Dance Moves in This Upbeat Number.

In the name of comedy, Inaaya makes Babloo strip in the middle of a public place. In their supposed 'meet-cute' scene in the flashback, she plants a kiss on him without his permission despite not even knowing him ever. Man, someone please hand her a book on sexual harassment!

It is not just Inaaya, even the movie loves to objectify the girls and Tiger Shroff, for the matter. In a very WTF scene, a female white doctor comes to check on Babloo, baring her ample cleavage, but the thing that distracted me here was the prom queen banner on her dress. Just why!

So anyway, while Inaaya is annoying the heck out of you, Tiger Shroff moves from one action setpiece to another, while trying to look his dashing best both in a blazer and without a shirt. Maybe it is my love for kungfu movies, but I admire this guy. He could have done to Bollywood what Tony Jaa has done for Thai action genre, or Iko Uwais for Indonesian cinema. Acting-wise, Tiger has still miles to go, but his martial arts prowess is unquestionably impressive.

So it is disappointing that Tiger is finding filmmakers who are more obsessed with showing how cool he looks in slo-mo when doing backflips or air-kicks. That's very Bhai-territory, Tiger can do much beyond that. Just give us more scenes like his one-shot intro action sequence in War, that challenges him as an artist.

So it doesn't help for both his and our sakes that the action sequences in Heropanti 2 are so lazily shot, and shoddily edited. The movie is shot in some exotic locales, there are plenty of foreign artistes and the songs use some good-looking set designs. But it totally kicked my balls when you can notice both the stunt double and the green screens in a simple bike riding sequence. As the action scenes get bigger and bigger, the stunts get more and more ridiculous, like when Babloo does a jump over a bridge while atop of moving train in the pre-interval fight scene. Or an SUV crashing into that very train and driving through the compartment just a few seconds earlier.

Look, I don't mind action scenes being illogical, but at least make it look good on screen. Like in RRR. No such luck here. The scenes are edited and placed in such a way with no respect for continuity that they make you grimace. Even when Heropanti 2 has good action stuff, like Babloo taking on the monks at a Shaolin temple, it cuts from there to other less interesting fights thereby ruining the impact. The icing on the cake is the climactic fight, that felt like a cross between Kick's finale, the climax of the first Harry Potter film, and the hallucination scene in Spider-Man: Far From Home, and trolls all of them equivocally.

I believe you might be wondering why I am not talking much about the plot or the screenplay. The reason is easily worth the guess. I don't want to get into discussing things that not even the makers are serious about. The core theme is about financial scamming through hacking, and if you really are interested in the idea, I suggest you watch this Tamil movie called Irumbu Thirai.

As Heropanti 2 ended after an agonising 142 minutes, I wondered how they managed to convince AR Rahman, Nawazuddin Siddiqui and Amrita Singh to be part of this film. In return, AR Rahman gave Heropanti 2 his most uninspired soundtrack of all time (Also why did one song called "Dafa Kar" keep sounding like "The F**ker"?). Nawazuddin Siddiqui amps up the manic cockiness of his character to the max and looks like he is having the time of his life. I want to believe so, because I really was not having the time of my life watching him do so. I had enjoyed his negative turns in films like Kick and even Munna Michael where he was quite the scene-stealer. but here Nawaz just couldn't fight the banality of how his character is written.

As for Amrita Singh, she was cast in the most pointless character of the film, and that's saying something when the film also has Inaaya.

- Some Scenes Are So Bad That It is Good... Can I Add That as a Point Here?

A few months back, there was this rumour that Heropanti 2 was a remake of the enjoyable Telugu spy thriller, Goodachari. While I should be glad that it isn't (originality zindabad!), in this rare case, I wished Heropanti 2 was the remake. At least it would have had a semblance of a plot. Now it is merely an assembly of lazy action scenes, bad acting, unappealing songs and Tiger Shroff and Nawazuddin Siddiqui doing their best they can with the shoddy material in hand - one jumping, and the other, hamming!

(The above story first appeared on LatestLY on Apr 29, 2022 02:26 PM IST. For more news and updates on politics, world, sports, entertainment and lifestyle, log on to our website latestly.com).