Aamir Khan on Sunday said Atul Kulkarni's brilliant adaptation of the classic Hollywood film Forrest Gump was what had inspired him to make Laal Singh Chaddha. 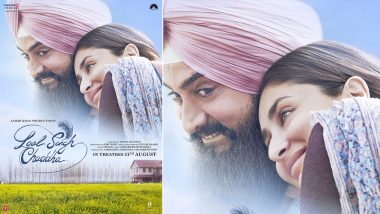 Aamir Khan on Sunday said Atul Kulkarni's brilliant adaptation of the classic Hollywood film Forrest Gump was what had inspired him to make Laal Singh Chaddha. Aamir told IANS: "Around 14 years ago, Atul Kulkarni, who is the writer of the adaptation, and I were talking one night. He asked me, 'What is your favourite film?', and I said Forrest Gump is one of them. I named a few more also. But somehow, we got talking about this film and then the night got over. He went home and I forgot about it. Laal Singh Chaddha: Aamir Khan Explains How It Took 14 Years for Him to Make Forest Gump Adaptation.

"Two weeks later, he called me up and said, I have written a screenplay for you. So, I said, 'But you don't write'. He replied, 'Yeah. But I have tried to write and I have written it.' I asked: 'In two weeks?' And he said, 'Yes'. He said, 'I have written an adaptation of Forest Gump. "At first, I started laughing. Forrest Gump is such a classic you don't want to even attempt a remake. Plus he's done it in only two weeks. And this is the first script he has written. Koffee With Karan Season 7: Aamir Khan Praises His Laal Singh Chaddha Co-Star Kareena Kapoor Khan, Calls Her ‘Perfect’.

"So, I didn't take it very seriously. It was my folly actually that I didn't take it seriously. I didn't hear it until two years (had passed). The day I heard Atul's narration, I just fell in love with it." "I found it so beautifully done. How can something like Forrest Gump, which is so deeply rooted in American culture be made in any other culture?, I could not understand. But Atul showed me how. It was Atul's adaptation that made me do it," Aamir added. The film, which features Aamir Khan and Kareena Kapoor in the lead roles, is scheduled to hit the screens on August 11.

(The above story first appeared on LatestLY on Aug 07, 2022 09:28 PM IST. For more news and updates on politics, world, sports, entertainment and lifestyle, log on to our website latestly.com).