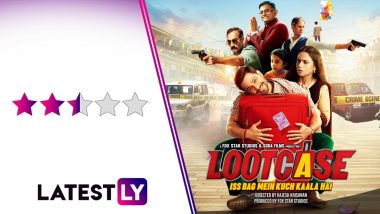 Lootcase Movie Review: Nandan (Kunal Kemmu), a frustrated middle-class press employee, never thought in his wildest imagination that peeing in a public toilet would bring unexpected windfall. That is, until one night after a midnight shift, he finds a big red suitcase full of stacks of Rs 2,000 notes near one. He is ecstatic at this stroke of fortune. Too bad Nandan didn't notice the ominous flickering of the lights, as he discovers the forbidden treasure! Lootcase Song Pavitra Party: Arhaan Hussain Khan's Rap Adds Funk To This Kunal Kemmu-Rasika Duggal Track (Watch Video).

Lootcase, that marks of big-screen directorial debut of Rajesh Krishnan (TVF Tripling), is a comic caper that has an engaging premise and a good roster of talented actors. The focus is on Nandan, who stays in a chawl with his disgruntled wife (Rasika Dugal) and a son with a smart mouth. One night, Nandan's monotonous life gets a shuffle when he finds the bag, who he names lovingly as 'Anand Petikar' (maybe the funniest line in the film).

What he didn't know then that the bag already has stake-owners in a corrupt MLA (Gajraj Rao) and a Nat Geo-obsessed criminal (Vijay Raaz), each desperate to get suitcase. There is also a cop (Ranvir Shorey) hired by the MLA to find the bag. Can Nandan manage to enjoy the unexpected good fortune? Or will he suffer the consequences of taking what doesn't belong to him?

The basic premise of Lootcase - a middle-class person striking a pot of gold unexpectedly - shares similarities with Anurag Kashyap's Choked that came out a few weeks back. Both the films showed how their protagonists try to hide their new wealth within the limited space of their residences, away from the eyes of their partners. While Demonetisation played a hurdle in Choked, Nandan in Lootcase has to contend mostly with Anand Petikar's real owners turning up.

Watch the Trailer of Lootcase:

The complicated situations that Nandan lands in while trying to keep his money hidden do make  for an interesting narrative. It also helps that the main cast puts up an entertaining act. As a crime caper, Lootcase reminds us of the kind of genre Guy Ritchie used to once excel in with his early efforts like Lock, Stock and Two Smoking Barrels (remade in Hindi as Phir Hera Pheri) and Snatch (remade as Fool & Final).

What brings Lootcase down that the writing isn't smart or even funny enough as those Ritchie movies. While the scenes are played out in a comical manner, and the actors do best with what they are given, we hardly feel the humour in the scenes. The screenplay often goes on a predictable route, with a surprising lack of... well, 'surprises', ending in what could now be termed a cliched climactic Mexican standoff.

The middle portions, especially, are the most lackadaisical parts,  with Nandan's repetitive struggles to hide the money not really turning out to be an absorbing watch. In fact, the villains who had more interesting subplots, get sidelined in these portions (Raaz is given a complete miss here). What Lootcase should have done here is go back and forth between Nandan and the antagonists, which could have made his situation even more gripping. Or develop the black humour in the proceedings in a more original manner.

Not doing so results in Lootcase turning out to be a merely passable entertainer when it has the potential to do.  Especially with Kunal Kemmu and Rasika Dugal putting up a good show and having a nice camaraderie going on between them. And Gajraj Rao, Vijay Raaz and Ranvir Shorey shining in their negative roles.

- The Plotline Looks Interesting on Paper At Least

- Lack of Freshness in the Screenplay

The lack of smartness in Lootcase loots the little potential of its engaging storyline and a wonderful cast that deserved a better script. At best, it comes across as a passable one-time watch. Lootcase is streaming on Disney+ Hotstar.

(The above story first appeared on LatestLY on Jul 31, 2020 02:07 PM IST. For more news and updates on politics, world, sports, entertainment and lifestyle, log on to our website latestly.com).