#MeToo: Singer Neha Bhasin Calls Indian Idol Judge Anu Malik A 'Predator', Alleges He Made A Move On Her When She Was 21 (Read Full Story)

Singer Neha Bhasin was also subjected to harassment by Anu Malik when she was 21 years old. In a series of tweets, Neha described the kind of Harassment meted out to her by Anu and called him some choice names. 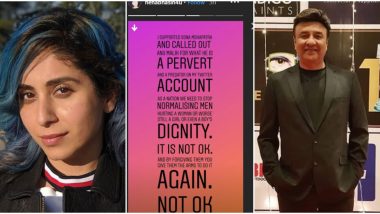 Back in 2018, some of the biggest names of Bollywood were dragged and exposed in what was the biggest #MeToo movement that the country saw. Right from producers and directors big and small (Sajid Khan, Vikas Behl, Nana Patekar, Subhash Ghai, Luv Ranjan among others) to singers (Kailash Kher, Papon, Anu Malik) were accused of being sexual predators, who used their position and power to exploit women (and even men in some cases). And now, singer Neha Bhasin, who has songs like "Dhunki Laage", "Swag Se Swagat" among other chartbusters to her credit, came forth and accused music composer and Indian Idol 11 judge Anu Malik of being a sexual predator. #MeToo: Sona Mohapatra Slams Sony Television for Retaining Anu Malik as the Judge of Indian Idol 11

Singer Sona Mohapatra, who has long back established that she will speak up her mind, consequences be damned, wrote an open letter to Sony TV, the makers of Indian Idol 11, calling them out for getting Anu Malik back on the show's judges panel.

And replying to her was Singer Neha Bhasin who was also subjected to harassment by Anu Malik when she was 21 years old. In a series of tweets, Neha described the kind of Harassment meted out to her by Anu and called him some choice names.

Read The Full Story Below:

I agee with you. We do live in a very sexist world. Anu Malik is a predetor, i too have run away from his strange moves when i was 21. I didn't let myself get into a sticky situation beyond him lying on a sofa in front of me talking about my eyes in a studio. I fleed lying https://t.co/tQgStLrYyT

I fleed lying my mums waiting below. He even msgd and called me after that to which i stopped responding. The point is i went to give him my cd and hope for a chance at a song. He was older and shouldnt have behaved the way he did. @The_AnuMalik is an ugly pervert and does not https://t.co/tQgStLrYyT

Even Called Out The Industry...

Even though i have a brave DNA Sona :) as you have known me the industry or the world was not an easy place as a young girl alone away from family due to many such Incidents or getting a hunch of such perverts. Perverts exist inside n outside our industry but why are we so https://t.co/VcCxryE8Ff

(2) so forgiving to the men, do we realise that is what gives them the strength to ruin our dignity, hide us women in our houses. I hid many times so as to not get myself in a sticky situation. Why is it ok? For a man who is predetor to walk free while we hide in shame n fear? https://t.co/VcCxryE8Ff

Last thing i wanna say is 19 to age 30 many older men tried to make their cheap advances oh ne rest assured i complained to the people i thought would bring justice. The Tv world says a womans role is of Ma, bhabhi aur behen oh yes i was told that too. So what is A man's role? https://t.co/VcCxryE8Ff

Anu Malik was accused by singers Sona Mohapatra and Shweta Pandit along with two other singers of sexual misconduct and was subsequently ousted from Indian Idol 10 and the channel released a statement that read, "Anu Malik is no longer a part of Indian Idol jury panel. The show will continue its planned schedule and we will invite some of the biggest names in Indian music as guests to join Vishal (Dadlani) and Neha (Kakkar) to judge extraordinary talents of Indian Idol Season 10." BREAKING! #MeToo Accused Anu Malik to Return to Indian Idol After Battling Allegations of Sexual Misconduct

Even though the #MeToo movement in India was short-lived, the force with which it hit the industry, shook some serious foundations and also brought about some much-needed awareness. While a lot of the cases that were filed against the industry folk are yet to see a final judgement be passed, if nothing, the movement has only encouraged men and women alike to stand up for themselves and become survivors and not victims.

(The above story first appeared on LatestLY on Oct 31, 2019 06:14 PM IST. For more news and updates on politics, world, sports, entertainment and lifestyle, log on to our website latestly.com).