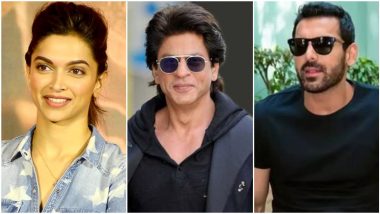 Shah Rukh Khan's next is with War director, Siddharth Anand. Titled Pathan, the movie backed by YRF also stars Deepika Padukone and John Abraham in the lead role. While an official announcement on the same is awaited, reports suggest the movie will go on floors in November 2020. It's a high octane action drama that's being touted as Diwali release. As per new reports in Bollywood Hungama, SRK is keen on having a Diwali release and Pathan will most likely release during the festive time in 2021. After Pathan, Deepika Padukone Rumoured to Star Opposite Shah Rukh Khan in Atlee's Sanki.

Speaking about the possibility of being a Diwali release, a source close to the development in his conversation with the same media portal said,  “Shah Rukh Khan and Aditya Chopra go down a long way and most of the SRK – YRF films have arrived during the Diwali weekend. Pathan will be no different. They are planning the schedule as well as post-production in a manner that the film releases on Diwali next year.”

SRK is likely to start shooting for the movie in November in Mumbai and Deepika and John will join him in January 2021. The duo will shoot for a marathon schedule at foreign locations. “It’s going to be one of the biggest action films of Bollywood and what better than Diwali for this Dhamaka," added the source further. The film would mark the end of Shah Rukh's long break from the celluloid.

(The above story first appeared on LatestLY on Oct 29, 2020 03:49 PM IST. For more news and updates on politics, world, sports, entertainment and lifestyle, log on to our website latestly.com).