Rhea's lawyer Satish Maneshinde has revealed that Rheah has petitioned the Supreme Court, seeking that the investigation into Sushant Singh Rajput's suicide be transferred to Mumbai. 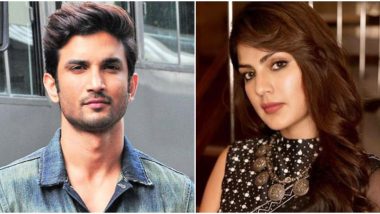 In a shocking development in the investigation of actor Sushant Singh Rajput's death, his father had filed an F.I.R. in Patna, against 6 people including Rhea Chakraborty for abetting Sushant's suicide and conspiracy. And while it is being reported that Rhea has been absconding/ gone underground ever since the F.I.R became public knowledge, fresh reports coming in suggest that Rhea has now resp9onded to the F.IR. Sushant Singh Rajput's Father Files an FIR against Rhea Chakraborty for Conspiracy and Abetment to Suicide: Reports.

As per a Tweet by ANI, Rhea's lawyer Satish Maneshinde has revealed that Rhea has petitioned the Supreme Court, seeking that the investigation into Sushant Singh Rajput's suicide be transferred to Mumbai. Sushant Singh Rajput's Father Files FIR against Rhea Chakraborty: Here's the List of Allegations Mentioned Against the Actress.

An FIR was filed by Sushant Singh Rajput's father against Rhea in Bihar yesterday.

Sushant Singh Rajput's father, alleged in his F.I.R. that his son was not suffering from depression before he met the actress in 2019, Rhea dominated his professional life choices and did not let SSR sign movies that did not have her as the lead actress. His father KK Singh also revealed that Sushant had expressed his wish to quit the industry and settle in Kerala, a decision that Rhea was opposed to and also that when Rhea left Sushant's house a few days before his suicide, she had taken a large sum of his money, important documents, his laptop and medical reports, jewellery and the late actor's credit cards as well. Did Ankita Lokhande Show Her Support To Sushant Singh Rajput's Father For Filing FIR Against Rhea Chakraborty in Her Cryptic Post?.

While Sushant's father filing an F.I.R and his sister Shweta Singh Kirti demanding justice for her brother have come as a complete shock to many, the Mumbai police have revealed that SSR's family had not revealed any of the above facts when they were questioned here. We wonder what will be the final outcome of this turn in the beloved SSR's suicide case. Either way, we hope the truth in this matter is uncovered and justice prevails.

(The above story first appeared on LatestLY on Jul 29, 2020 05:05 PM IST. For more news and updates on politics, world, sports, entertainment and lifestyle, log on to our website latestly.com).