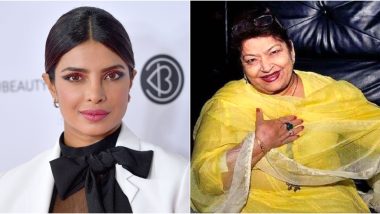 Famed Bollywood choreographer Saroj Khan breathed her last on July 3. The dancer-choreographer passed away aged 71 in Mumbai. Saroj Khan's passing has come as a shock to many and everyone who worked with her has been deeply saddened with the news. Having al illustrious career in Bollywood, Saroj Khan choreographed more than 2000 songs for Bollywood films and worked with generations of actors. From choreographing iconic dance sequences like "Ek Do Teen" to "Dola Re Dola", Khan inspired several artists with her graceful dances. Several Bollywood actors took to social media to express condolences over her passing. Recently, Priyanka Chopra also shared a post remembering Khan. Saroj Khan Demise: Govinda Condoles the Death of Ace Bollywood Choreographer With an Emotional Video Message Recalling Their First Meet.

Priyanka Chopra took to Twitter to write a heartfelt note about the legend that Saroj Khan was. The actress in her post mentioned how Khan was the reason millions of teenage girls dreamed to dance. Expressing her condolences on the passing of Khan, she wrote, "Many of my teenage dreams came true when she choreographed me in Agneepath. Taskmaster, perfectionist, innovator, trendsetter, genius... Saroj ji was many things to many people. To me, she'll always be an institution that defined an era of dancing with abandon, emotion & passion. May the heavens dance to your tune Masterji.."Saroj Khan Was Happy to Be a Part of Sara Ali Khan and Ananya Panday's Journeys, Says Late Choreographer's Daughter.

To me, she'll always be an institution that defined an era of dancing with abandon, emotion & passion. गुन गुन गुना रे... May the heavens dance to your tune Masterji... #RIPSarojKhan

Priyanka in her post mentioned how she worked with Saroj Khan for Agneepath's "Gun Gun Guna Re" song in which we have to say the actress was a delight with those brilliantly graceful moves. Among other celebs who also shared heartfelt condolences for Saroj Khan's passing were actresses such as Alia Bhatt, Madhuri Dixit Nene among others.

(The above story first appeared on LatestLY on Jul 03, 2020 11:53 PM IST. For more news and updates on politics, world, sports, entertainment and lifestyle, log on to our website latestly.com).