Meanwhile, on the work front, Saif Ali Khan has two major film releases namely Vikram Vedha around September this year and Adipurush in 2023. HBD to the dashing Nawab of Bollywood! 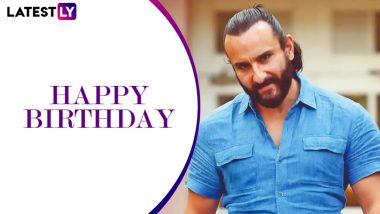 Saif Ali Khan, who made his Bollywood debut in the year 1993, has had a rather unpredictable career. In his journey so far in showbiz, the actor has seen more duds rather than hits at the box office, but that has never affected him. As time and again, the Nawab has chosen movies that has challenged him as an actor. Right from comedy, romance, action to even turning into a villain on the silver screen, he has done it all.  To say the least, he's a versatile actor who has carved a niche of himself in the industry. Kareena Kapoor Khan and Saif Ali Khan Along With Son Taimur Attend the Rolling Stone Concert in Style (View Pics).

And as Saif Ali Khan celebrates his birthday today (August 16), we bring to you his top five songs from Bollywood that'll make you scream his name when the tune starts playing. Let’s get started. Vikram Vedha: Hrithik Roshan and Saif Ali Khan’s Film to Release in Two Months, Fans Demand Makers to Share New Updates.

Main Khiladi Tu Anari, is an energetic song from 1994’s film of the same name that sees a young Saif Ali Khan dancing to its beats along with Akshay Kumar. Nostalgic and how, the track sees Saif in a kickass avatar.

From the movie Hum Tum, featuring Saif alongside Rani Mukerji, this melody from YRF’s film is a delight to watch and listen to. Khan’s swag-filled antics while teasing Rani on the streets and vice versa is absolutely fun.

A complete sip of nostalgia, this particular song from the classic movie Dil Chahta Hai is crazy and how. Saif does all things Bollywood in the track and impresses us in his expressions and moves. Must-see!

Deepika Padukone and Saif serve us quite a laughter in this song from Love Aaj Kal. Right from the lyrics to the hook step, this melody of Khan instantly transports to a different world altogether. Lovely one indeed!

Last but not the least, we have a badass song of Saif Ali Khan that sees him in a never seen before avatar. In the track, we see the actor looking sexy AF and the way the track is shot… next level!

That’s it, guys! These are some of the top chartbuster songs of the birthday boy. Happy Birthday, Saif Ali Khan from team LatestLY!

(The above story first appeared on LatestLY on Aug 16, 2022 12:10 AM IST. For more news and updates on politics, world, sports, entertainment and lifestyle, log on to our website latestly.com).