Salman Khan Wraps Shooting for Radhe, Announces it in His Own Style (Watch Video)

It was only recently that Salman Khan had resumed shooting with Disha Patani, Randeep Hooda and Jackie Shroff and we are glad to realise that team Radhe has wrapped its shooting on time. 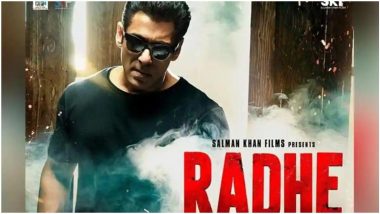 Salman Khan fans can rejoice as the actor has finished shooting for Radhe: Your Most Wanted Bhai. The movie was earlier announced as his Eid release but with coronavirus coming in the picture, all his similar plans went for a toss. It was only recently that he had resumed shooting with Disha Patani, Randeep Hooda and Jackie Shroff and we are glad to realise that the team has wrapped its shooting on time. Salman Khan's Radhe to Feature South Indian Stars Bharath Srinivasan, Megha Akash, Narra Srinu.

Salman took to his Twitter account to announce the wrap in his own style. Now that he has completed shooting for the project that was on his priority list, the actor will start working on Aayush Sharma's next. Later he has Sajid Nadiadwala's Kabhi Eid Kabhi Diwali with Pooja Hegde and also has Kick 2 with Jacqueline Fernandez and the Hindi remake of South Korean movie, Veteran. Radhe: Your Most Wanted Bhai - Salman Khan's Manager Refutes Rumours of Demanding Rs 250 Crore For the Film's Release on OTT Platform (Deets Inside).

Directed by Prabhudeva, there are chances that Radhe will hit screens on Republic Day 2021. And if it happens, it is likely that it will clash with Akshay Kumar's Sooryavanshi which is touted to have a Republic Day release as well.

(The above story first appeared on LatestLY on Oct 14, 2020 06:29 PM IST. For more news and updates on politics, world, sports, entertainment and lifestyle, log on to our website latestly.com).