Sanjay Dutt Beats Cancer: Akshay Kumar Is Elated With the Good News and Excited to Meet Baba on the Sets of Prithviraj (View Tweet)

Bollywood actor Sanjay Dutt on October 21, 2020, announced that he is now cancer-free. To which, Akshay Kumar is excited to meet Baba on the sets of their upcoming film Prithviraj. Check it out. 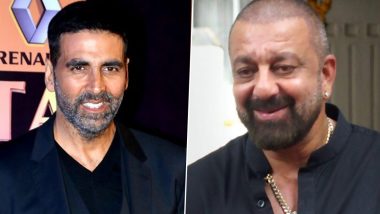 Bollywood actor Sanjay Dutt on October 21, 2020, announced that he is now cancer-free. The superstar who was on a break from work due to his treatment shared this good news on social media and made his fans all joyous. Dutt said that "The last few weeks were very difficult time for my family and me. But like they say, God gives the hardest battles to his strongest soldiers. And today, on the occasion of my kids’ birthday, I am happy to come out victorious from this battle."Many congratulatory messages started pouring in for Sanjay and now even Khiladi Akshay Kumar has reacted to Baba's happy moment. Sanjay Dutt Wins Battle Against Cancer, Writes a Note of Gratitude for Medical Staff and Fans.

"Best news! So good to hear this baba. Looking forward to seeing you on set real soon," Akki replied to Sanju's tweet. For the unaware, Akshay and Sanjay will soon be seen in a historical film titled Prithviraj. And that is why Kumar mentioned that he will see the recovered actor on the sets soon. Prithviraj is directed by Dr Chandraprakash Dwivedi. Prithviraj: Manushi Chhillar Says Akshay Kumar Starrer Period Drama's Story of Prithviraj and Sanyogita Has Intrigued Her Since Years.

Best news! So good to hear this baba 🤗 Looking forward to seeing you on set real soon. https://t.co/HSx8za7KsW

Reportedly, Akshay and Sonu Sood have already started shooting for the flick whereas Dutt is expected to do the same post-Diwali. The movie will see Manushi Chhillar as the lead actress. Coming back to the Khiladi's excitement to see his co-star, it's overwhelming. Stay tuned!

(The above story first appeared on LatestLY on Oct 21, 2020 10:08 PM IST. For more news and updates on politics, world, sports, entertainment and lifestyle, log on to our website latestly.com).