Veteran Bollywood choreographer, Saroj Khan breathed her last on July 3, 2020, at a Mumbai hospital. The legendary dancer passed away due to cardiac arrest at the age of 71. 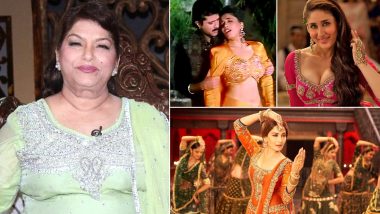 Veteran Bollywood choreographer, Saroj Khan breathed her last on July 3, 2020, at a Mumbai hospital. The legendary dancer passed away due to cardiac arrest at the age of 71. Born on 22nd November 1948 as Nirmala Nagpal, she started her career as a child artist at an early age by playing the role of Shyama in Nazarana. It was ahead in her career when she turned into a background dancer in the 1950s. However, in the year 1974, she got her first break as an independent choreographer with Geeta Mera Naam. In an amazing career spanning over four decades, Saroj Khan has choreographed more than 2000 songs till date. Saroj Khan, Veteran Bollywood Choreographer, Dies of Cardiac Arrest at 71.

Fondly called as Masterji, from her students and industry wallahs, Saroj Khan has made many Bollywood divas dance on her tunes. She has worked with Madhuri Dixit, Sridevi, Aishwarya Rai Bachchan, Kareena Kapoor Khan and many more. And so remembering some of her great works, we bring to you popular songs choreographed by Saroj Khan. Saroj Khan Passes Away: This Song from Kalank Picturised on Madhuri Dixit Was the Last Dance Track She Had Choreographed (Watch Video).

Starring the ever graceful Madhuri Dixit and Anil Kapoor, this song from the movie Beta became quite a famous tune all thanks to the dance moves. With this Madhuri even got the title as the 'Dhak Dhak' girl.

Quite a chartbuster song featuring Madhuri and Sanjay Dutt, this one became a trendsetter for its signature move.

One of the most unforgettable songs choreographed by Saroj Khan is Hawa Hawai from Mr.India starring  Sridevi.

Kareena Kapoor Khan's this particular song was a hit, and the reason behind it was the choreography by the legendary, Saroj Khan.

This is one is the last choreographed song by Saroj Khan starring her favourite student Madhuri Dixit. Saroj Khan literally brought a lot of emotions with this one.

Saroj Khan will always be remembered for contributing hugely to the Hindi cinema. She is also the one who bagged three national awards. Meanwhile, as per reports, Khan's last rites will take place in Malvani, Malad on July 3. May her soul rest in peace. Stay tuned!

(The above story first appeared on LatestLY on Jul 03, 2020 08:26 AM IST. For more news and updates on politics, world, sports, entertainment and lifestyle, log on to our website latestly.com).