Recently there were reports about Shah Rukh Khan buying the remake rights of Spanish show, Money Heist that airs on Netflix. However, the actor insists it's a mere rumour and he has no plans of any such remake. After Badla, which was a remake of Spanish film, The Invisible Guest, SRK remaking another Spanish content made sense but sadly, it's not happening. 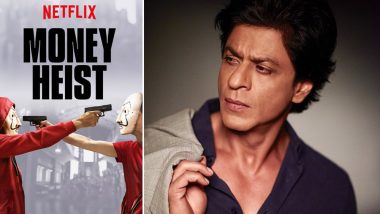 Recently there were reports about Shah Rukh Khan buying the rights of Spanish show, Money Heist that airs on Netflix. Industry insiders believed that SRK had plans of making a movie on the same subject but he may or may not star in it. While the prospect looked immensely promising and his fans were looking forward to this remake from his production house, the star insists he has no such plans. If the Raees actor is to believe, he is not remaking this popular Spanish thriller and your excitement can now calm down for a bit.

In Shah Rukh's recent interaction with popular film critic, Rajeev Masand at Indian Film Festival of Melbourne 2019, he clarified the reports of him buying the remake rights are mere rumours. When the host asked him about his different production ventures and the decision to remake Money Heist, he refuted the story saying it's a mere rumour and there's no truth to it. His production house is currently producing Betaal, Bard of Blood and Class of '83 for Netflix and he's in talks for more projects with them. But Money Heist is definitely not one of them. Shah Rukh Khan, Aishwarya Rai Bachchan, Priyanka Chopra: List of Bollywood Stars Who Rejected Hollywood Movies Just Like Govinda Turned Down Avatar.

After SRK produced Badla, a remake of a Spanish movie, The Invisible Guest, reports of him remaking a content from the same language made sense. But after the confirmation coming straight from the horse's mouth, there's no scope left for any confusion. So all you eager folks, we are sorry to share this sad news with you.

(The above story first appeared on LatestLY on Aug 10, 2019 10:06 AM IST. For more news and updates on politics, world, sports, entertainment and lifestyle, log on to our website latestly.com).