Shah Rukh Khan to Have a Cameo in Sidharth Malhotra and Kiara Advani's Shershaah?

If the cameo happens, it would be second in a year for SRK after Ranbir Kapoor and Alia Bhatt's Brahmastra. 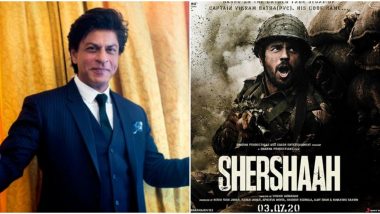 While Shah Rukh Khan's next movie announcement may still be a couple of months away, he's busy making cameo appearances in his friend, Karan Johar's production ventures. After having a special appearance act in Ranbir Kapoor, Alia Bhatt and Amitabh Bachchan's Brahmastra (the same was confirmed by Karan), new reports suggest the actor has shot for another cameo in Shershaah. The movie produced by Dharma stars Sidharth Malhotra and Kiara Advani and is a biopic on Kargil War martyr, Captain Vikram Batra.

The new report in Pinkvilla suggests that King Khan has already shot for his cameo and the confirmation of which will be announced later. The website quoted the trade source saying, "Apparently, Shah Rukh has done a cameo in Shershaah but it is all very hush-hush as the makers want to announce it at their own time. The biopic on the life of Kargil war hero, Captain Vikram Batra, has Sidharth Malhotra playing a double role in it - as Captain Batra and his identical twin brother Vishal. Kiara portrays Captain Batra's fiancée Dimple Cheema. Though the role essayed by SRK is small in terms of length and screen time, he plays a very significant role in the movie and in Captain Batra's life. SRK's character is a strong one and he is one of the people who shape Captain Batra’s life in important ways – from his early life and military career to the Kargil war.” Shah Rukh Khan and Rajkumar Hirani's Collaboration is Getting Delayed for THIS Reason?

When Karan Johar requested SRK to come on board for a short role in his next, the actor was more than willing. The filmmaker turned producer is like a family to Shah Rukh and there's no way he could say no to him. Meanwhile, there were also rumours about how Karan is planning to launch Suhana Khan with Bigg Boss 13 fame Asim Riaz in Student of the Year 3. However, Karan later issued a clarification saying it's completely false and there's no truth to it whatsoever. We hope he's saying the truth! Coming to Shershaah, the film will hit the screens on July 3, 2020.

(The above story first appeared on LatestLY on Feb 19, 2020 10:13 AM IST. For more news and updates on politics, world, sports, entertainment and lifestyle, log on to our website latestly.com).