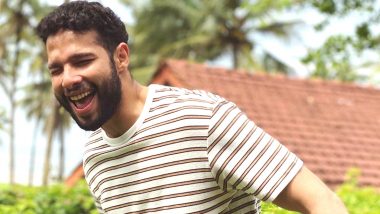 Bollywood actor Siddhant Chaturvedi, who is currently in Goa shooting for his upcoming untitled film with Deepika Padukone and Ananya Pandey, has taken inspiration from the Sanjay Dutt-starrer Munna Bhai MBBS for his latest picture on social media. Siddhant took to Instagram, where he shared a picture dressed in striped pants and a T-shirt. He strikes a merry pose in the frame. Siddhant Chaturvedi Says In my Head I’ve Always Been a Actor

For the caption, he borrowed a line from the hit film, and wrote: "Carom ramwanu, juice peevanu, majja ni life." The line, which translates to "play carrom, have juice and enjoy life", is from the scene when Sanjay plays carrom with Rustom's father and the old man mumbled the line right before winning the game. Siddhant Chaturvedi Shares Video of Stunt That Led to Hilarious Results

"Munna Bhai MBBS" released in 2003 and is directed by Rajkumar Hirani. The film was about a goon named Munna, who wants to fulfill his father's dream and become a doctor.

(The above story first appeared on LatestLY on Sep 15, 2020 08:22 PM IST. For more news and updates on politics, world, sports, entertainment and lifestyle, log on to our website latestly.com).