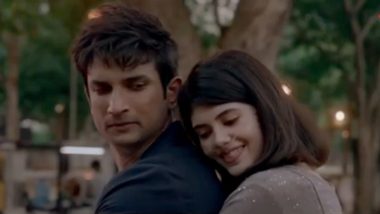 July 14 marks the one month death anniversary of Sushant Singh Rajput. On this day, his near and dear ones like Ankita Lokhande, Ekta Kapoor, Mukhesh Chhabra and more paid tribute to the late actor on social media. Sushant's Dil Bechara co-star Sanjana Sanghi also was among them who remembered the actor by sharing memories from the film. And now, the makers have released the teaser of Taare Ginn, a love song from Dil Behara. Sanghi shared the same glimpse on her social media and boy the 13 seconder clip will make you teary-eyed for sure. Sanjana Sanghi Remembers Dil Bechara Co-Star Sushant Singh Rajput, Says ‘Whoever Said Time Helps Heal All Wounds, Was Lying’.

"A billion smiles, but Kizie’s smile was Manny's favourite," she captioned the post. For the unversed, in the film, Sushant plays the role of Manny and Sanjana is Kizie. The story of the flick will see the the two as cancer patients who are in love. The movie is adapted from a novel by John Green namely 'The Fault In Our Stars'. Talking about the teaser, it sees the leads smiling and happy in each other's company. RIP Sushant Singh Rajput: Ankita Lokhande Remembers Late Actor a Month After His Demise, Lights a Lamp.

Check Out The Teaser of Taare Ginn Below:

Taare Ginn is penned by Amitabh Bhattacharya whereas AR Rahman has given music for it. Mohit Chauhan and Shreya Ghoshal are the ones who have lent their voices for the playful song. Helmed by casting director Mukesh Chhabra, Dil Bechara is Sushant’s last film and is going to release on Disney+ Hotstar from July 24. Stay tuned!

(The above story first appeared on LatestLY on Jul 14, 2020 06:09 PM IST. For more news and updates on politics, world, sports, entertainment and lifestyle, log on to our website latestly.com).