Unfinished: Priyanka Chopra Speaks About Her Goals and Identity In The New Video

Priyanka Chopra is soon to release her memoir named 'Unfinished.' The global icon has been teasing about it since a while through her series of short Instagram montage videos and pictures. 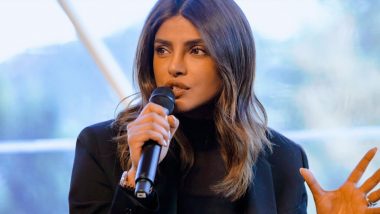 Priyanka Chopra is soon to release her memoir named 'Unfinished.' The global icon has been teasing about it since a while through her series of short Instagram montage videos and pictures. The actress shared one more post to add to this series in which she is seen speaking about herself and how she desires to be identified as, by the world. Priyanka Chopra Teases Upcoming Memoir 'Unfinished' By Sharing a Glimpse Of Her Journey From Childhood to the Miss World Win (View Post).

In the video, she is seen saying that she does not want to be called but would love to be known as an actor. She adds that wherever and whatever her goals she will have, she wants to be known for them. She also speaks about walking an unknown path which will only be hers. She shared this video saying, 'This is my story.' Here, take a look at it.

This is my story. #unfinished

Unfinished' will be a collection of personal essays, stories, and observations by the actor, producer, singer, and UNICEF Goodwill Ambassador, Chopra. She will be soon in Matrix 4 along with Keanu Reeves apart from a Netflix project as well as her music themed show. Stay tuned for more updates.

(The above story first appeared on LatestLY on Oct 01, 2020 11:40 PM IST. For more news and updates on politics, world, sports, entertainment and lifestyle, log on to our website latestly.com).