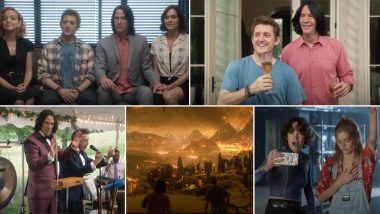 A new trailer for the upcoming comedy, Bill and Ted Face The Music has released online. Keanu Reeves and Alex Winter return as the titular goofy, eccentric titular characters disrupting the space-time continuum for the third time. In the new movie, the aspiring musicians have composed a song that will unite the world and save it. The only problem is that they have not composed it YET. So, to fulfil the prophecy, they time travel to the future to steal the song from themselves when they have already invented it.

To think of it, that is brilliant. Avengers could have saved Black Widow, had they only travelled to the future where they already had the Infinity Stones, instead of carrying out the time heist in the past. Absurd, but that is what the tone of the upcoming film is like. Bill and Ted RULE.

At one point in the trailer, Bill and Ted travel to the future and meet their jacked-up counterparts in the prison. The CGI rendered scene looks seamless. The opposite of what they did to Chris Evans in Captain America: The First Avenger. It is quite amusing and fascinating to see a buffed up version of Keanu Reeves. Now, that is one sight we won't be able to get out of our heads.

Watch The New Trailer Of Bill And Ted Face The Music Here:

In another scene, Bill and Ted find death, in its personification, playing hopscotch. Let us see how their reunion with death goes. They also find their biggest cheerleaders in their daughters.

(The above story first appeared on LatestLY on Jul 23, 2020 08:13 PM IST. For more news and updates on politics, world, sports, entertainment and lifestyle, log on to our website latestly.com).