Danny Boyle is a British film director who is famous for directing films like 28 Days Later, 127 Hours and Trainspotting. 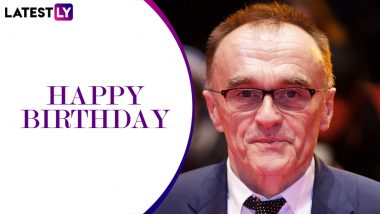 Danny Boyle is one of the best talents hailing from Britain. Boyle’s work is greatly filled with dramas and sometimes tense explorations of human characters. These films are filled with amazing dialogue and greatly bring out the talents of the actors on screen, for which a lot of due has to be given to Boyle’s directing. From exploring the scenario of a zombie apocalypse to making a cautionary tale about drugs, Boyle makes sure to make his films grounded and deep rooted in human nature. Yesterday Trailer: Danny Boyle's Latest Outing Explores A World Without The Beatles And How One Man Tries To Bring Back The Beatlemania.

For all the amazing work Danny Boyle has done over the years, has made him a top director. So to celebrate Danny Boyle’s 65th birthday, we are taking a look at five of his best films ranked according to IMDb.

Shallow Grave was Danny Boyle’s debut, and what a great start to his career it was. Featuring Ewan McGregor in the lead, Shallow Grave follows a group of flatmates who set off a chain reaction after burying a new tenant who left behind a large sum of money. It fit right into one the darkest black comedies I have ever seen and was just an absolute blast from start to finish.

Watching 127 Hours feels like a fight for survival just because of how dire the stakes are here. Following a mountain climber stuck in a boulder, this is a grueling and thrilling watch as you see the ways this man tries to survive. If you have indeed watched the film, then you will definitely be “needing a hand” to get up and process what you just saw.

Danny Boyle honestly in my opinion has crafted the best modern zombie film. 28 Days Later puts the scary back into zombies and tells a story maintaining the horror while still exploring just what people will do in order to survive. Featuring a great performance from Cillian Murphy, 28 Days Later should be watched by everyone who enjoys zombie films. Danny Boyle’s Yesterday, a Film Inspired by the Beatles, to Release in India on July 12.

Slumdog Millionaire told an emotional rag to riches story about a man who came from the slums and went on to will millions in Who Wants to be a Millionaire?. Launching the amazing careers of actors like Dev Patel and Freida Pinto, Slumdog Millionaire won the most Oscars of any film in 2008.

Boyle’s best film, Trainspotting is a great cautionary tale about drugs that mixes in feel good beats with a lot of other elements. Featuring a great performance from Ewan McGregor, Trainspotting is a worth watch for anyone who wants to see Danny Boyle at his best.

Danny Boyle is a great director and we can’t wait to see what more projects he has lined up. With this we finish off the list and wish Danny Boyle a very happy birthday.

(The above story first appeared on LatestLY on Oct 20, 2021 09:50 AM IST. For more news and updates on politics, world, sports, entertainment and lifestyle, log on to our website latestly.com).