Frozen 2 Movie Review: Idina Menzel And Kristen Bell Bring Back The Cute Camaraderie Of Sisters In This Mystical Sequel

Disney brings the Ice Princess back to life as Frozen 2 gears up for its release. The film stars Idina Menzel, Kristen Bell, Jonathan Groff, Evan Rachel Woods and more. The film has been directed by Jennifer Lee and Chris Buck. It releases on November 22. 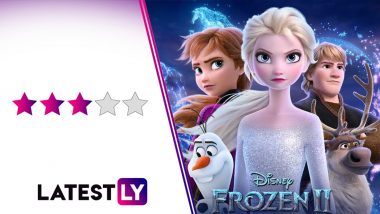 Frozen 2 review: Idina Menzel and Kristen Bell return to play Disney princesses in the sequel to the 2013 animated flick, Frozen, that glorified sisterhood. Directors Jennifer Lee and Chris Buck try to recreate the magic of Elsa and Anna as the Arendelle sisters in a film that we'd rather not have. Sure, it makes for a family entertainer. However, there are several nuances of the film that one simply cannot accept or even follow. Evidently, I've made it obvious that the film didn't really leave a lasting impact on me. Here's how the film fared. Frozen 2 Poster: Elsa and Anna are All Set for a Mysterious Adventure, the Film's New Trailer to Be Out Tomorrow

The story takes us back to Arendelle, a happy homeland of the "Frozen" sisters Elsa and Anna. The scene is different from before because now, the peace is upon them and they have all the happiness in the world. It is shortlived though as a folklore of the past takes them to the Enchanted Forest, a place that was once richly protected by the magic of the four elements such as water, fire, air and earth. What happened to the Enchanted Forest? How is it related to Arendelle? What is it in the past that was wrong and needs to be changed? Frozen 2 focusses on this new adventure that the sisters embark on while they ensure that their own safety, as well as the safety of their citizens, is prioritized.

In all fairness, Frozen really didn't need a sequel. However, it wasn't all that bad to bring back the sisters and showcase a new side to their love and duty towards Arendelle. Idina Menzel and Kristen Bell once again prove that their voices can be such a powerful tool as they reprise the role of Elsa and Anna respectively. Sure, Kristoff, Sven and Olaf are also very much present in the narrative. In fact, you see a refined Olaf trying to understand what it means to transform and change. Much like everyone, he too has trouble grasping to the idea of growing up (growing old, rather) and transforming oneself. However, he does it with his standard humour that makes the audience giggle. Frozen 2 Trailer: Elsa and Anna Set Out on Journey to Protect Arendelle As Disney Releases Exciting New Video on the First Day of Fall!

The animation is spotless. Leave it to Disney and they will ensure to bring you a visual spectacle. Same goes for Frozen 2. The animation is so beautiful that the visuals certainly leave you elated. Be it a demonstration of Elsa's power or even when the other elements come to life, it is all too good for words. However, while one would expect the music to be just as refined from the makers of Frozen, Frozen 2 doesn't live up to it. In fact, the songs and compositions are rather underwhelming. Also, the plot or even the characters don't share the same kind of energy that the prequel had, making it lack emotions.

- Mystical representation of a new world as revealed by Disney

- Several loopholes in the story

- Not as poignant as the prequel

Sure, Frozen 2 definitely would appeal to the younger crowd who afore Disney films. However, the kind of emotional stirring that an adult requires or expects from the film is not delivered. The fact that the story is so convenient makes it difficult to empathise with. Not to mention how the movie could have had a better conflict and even narration as opposed to how they chose to work on this one. Even the songs are not as brilliant as the prequel. So yes, a family entertainer, sure. But not for the adults who would rather be entertained by a Ford v. Ferrari or even a repeat of Bala, for that matter!

(The above story first appeared on LatestLY on Nov 18, 2019 12:08 AM IST. For more news and updates on politics, world, sports, entertainment and lifestyle, log on to our website latestly.com).