As the cast of Harry Potter series returns to Hogwarts this January courtesy HBO Max, we decided to dig up on the audition history of the three principal characters played by Daniel Radcliff, Emma Watson and Rupert Grint. Check them out here. 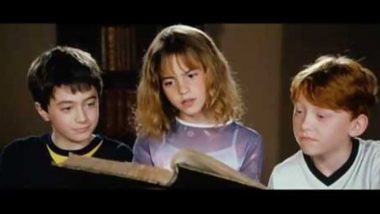 The first Harry Potter film Philosopher's Stone, known as Sorcerer's Stone in some parts of the world, turns 20. A huge reunion event has been arranged to see the return of the cast members in January on HBOMax. While the fans of the books and series are excited for this event to happen, the fact that JK Rowling, the reason these books and movies exist, won't be attending the event has put a dampener on their spirits. Honestly, we don't need a reason to remember a book series that literally made our childhood a happy place. The wait for every book was our favourite part growing up. Then the movies released and we just couldn't contain our excitement. So it will always be special when the favourite characters from book took human form. Let's know how they made that happen. Return to Hogwarts: Harry Potter Cast To Reunite for Franchise's 20th Anniversary; To Stream on HBO Max on January 1, 2022 (Watch Video)

Getting Harry was of paramount importance because it is his story and it turned out to be a quite a task. Speaking to Closer Weekly, director Chris Columbus said, "We had auditioned hundreds of actors for the role of Harry, but with little luck. Then, the first casting director, in a fit of total frustration, threw up her arms and said, 'I just don’t know what you want!' Sitting on a shelf in the office was a video copy of David Copperfield, starring Daniel Radcliffe. I picked up the video box, pointed to Dan’s face, and said, 'This is who I want! This is Harry Potter." Return to Hogwarts: JK Rowling To Miss Harry Potter 20th Anniversary Reunion on HBO Max

His parents weren't game for it immediately but when Chris promised that their boy would be looked after, Radcliffe got the go ahead. Check out his audition here...

Rupert was an instant choice as Ron Weasley. Chris added in the same interview, "When it came to Ron Weasley, we immediately fell in love with Rupert Grint. He’s extremely funny and has such an incredibly warm presence." And he was so right. Grint had sent a rap video to Chris as his audition tape. "I dressed up like my teacher, who’s a girl, so it was kind of scary. Then I made up this rap song about how much I wanted to be in the film. I guess it worked, because I had a bunch of auditions," he told Closer Weekly. While we don't have the exact video of his rap, here's what the rap sounded like:

Emma was just at the right place at the right time, rest her talent did the job for her. The team had come down to her school at Oxfordshire for auditions and she joined it.

What's interesting here is that J K Rowling had given a strict mandate that the cast of Harry Potter movies needed to be 'all-British'.

(The above story first appeared on LatestLY on Nov 19, 2021 05:21 PM IST. For more news and updates on politics, world, sports, entertainment and lifestyle, log on to our website latestly.com).