Hawkeye Ending Explained: Decoding the Climax to Jeremy Renner’s Marvel Show and What Happens to Kingpin at the End!

The final episode of Hawkeye ends on a wholesome note. With everything resolved and done, Clint can finally enjoy Christmas and go back home to his family, but the events before that definitely packed a chaotic punch. 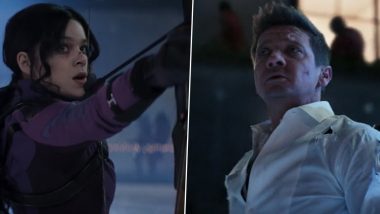 Hawkeye just ended its six episode run today in a finale that felt a bit rushed, although it was packed with surprises. The episode picks up right after ending of episode five where it’s revealed that Eleanor Bishop hired Yelena to kill Hawkeye and is working with Wilson Fisk aka Kingpin. Kate Bishop and Clint Barton then take on the tracksuit mafia all while being persuaded by Yelena Belova. Vincent D’Onofrio also returns as Kingpin in the Marvel Cinematic Universe. It felt like he never left the role. Hawkeye Finale Review: A Frustrating Episode That Makes You Question the Purpose of Jeremy Renner’s Disney+ Series or Why Kingpin Returned! (LatestLY Exclusive).

The final episode of Hawkeye ends on a wholesome note. With everything resolved and done, Clint can finally enjoy Christmas and go back home to his family, but the events before that definitely packed a chaotic punch. So with that out of the way, let’s take a look at the ending of Hawkeye and what character revelations does it pack.

After killing Kazi and finding an injured Fisk, Maya pulls up a gun on him. Fisk tells her that family never really sees eye to eye and camera pulls back and you hear a gunshot and a body hitting the floor. If anything, the rule of TV and films is that if you don’t see a character die on-screen, then they are definitely not dead. So don’t worry people who are afraid about Kingpin being killed off.

Finally able to convince Yelena not to kill him and with Eleanor being arrested, Clint and Kate travel to his home to celebrate Christmas. Over there Clint introduces Kate to his family. We see Clint meet Laura and give her the Rolex that he got from Maya’s apartment. We get the reveal that Laura was actually a SHIELD agent and that the watch belonged to her. Clint and Kate then go to the back of the house where they burn the Ronin costume and walk back to the house discussing potential superhero names for Kate.

The last episode was a bit of a bummer seeing just how rushed the plot points were. Even the storyline with Fisk felt weirdly handled as there wasn’t much there to it. Seeing how Maya shot him, they definitely are setting up her origins. Only thing here being that with Fisk being shot, he is definitely going to go blind like how he did in the comics. But since this is the MCU, they probably might do something different. Also this definitely feels like a different version of the Kingpin from Daredevil on Netflix. Looks like they are rebooting these characters after all. Year Ender 2021: From WandaVision, Squid Game to Hawkeye; Five Breakout Shows Of This Year That You Should Definitely Watch!

Well that was it for Hawkeye. Now the wait starts for Moon Knight which is heavily rumoured to be premiering in February.

(The above story first appeared on LatestLY on Dec 22, 2021 05:30 PM IST. For more news and updates on politics, world, sports, entertainment and lifestyle, log on to our website latestly.com).