Fans have been expecting Yelena to show up for quite a bit now, and seeing her in action over here was just the icing on top of the cake. Hawkeye already has been another hit for Disney+, and the inclusion of Yelena just makes it even better. 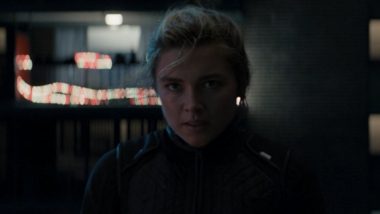 Black Widow overall was quite the disappointing film if you would go to see. It felt like a cookie cutter Marvel film that we have already seen many times before. It was also a film that felt like it came out a few years too late and focused more on building other characters than telling its own story. But if there was one positive thing that everyone agrees about Black Widow, it has to be Florence Pugh as Yelena Belova. So if you tuned into Hawkeye this week, you will be met with quite the nice surprise. Hawkeye: Jeremy Renner Opens Up About His Character in the Disney+ Hotstar Series.

Hawkeye episode four saw the return of Florence Pugh as Yelena Belova. Set up during the post-credits scene of Black Widow, we see Valentina send Yelena on a mission to hunt down Hawkeye. As expected, Yelena shows up thwarting off Hawkeye’s plans and fighting him at the end of the episode on the rooftop of a building.

Fans have been expecting Yelena to show up for quite a bit now, and seeing her in action over here was just the icing on top of the cake. Hawkeye already has been another hit for Disney+, and the inclusion of Yelena just makes it even better. As expected, fans are freaking out on twitter, and here are some of the best reactions that we found regarding her return. Hawkeye Episode 4 Recap: From Black Widow to the Secret Rolex Watch, 6 Plot Twists From the Fourth Episode of Jeremy Renner’s Disney+ Show (SPOILER ALERT).

Young Avengers in The Making!

Florence Pugh is a Bit of a Scene Stealer

it's the Sisterly Love

YELENA WEARING A BRAID JUST LIKE NAT I CAN'T DO THIS pic.twitter.com/FjcbKOWfr6

can we please mention the fact that yelena did natasha’s pose😭 pic.twitter.com/RX0pwMlcRf

Clint when he finds out who Yelena is & who her sister is #Hawkeye pic.twitter.com/uyikRi82di

#HAWKEYE E4 did a deep dive on Clint’s feelings during the Blip which was much needed for context. They also said a “thing” I picked up on that fans wanted closure on for YEARS. And holy shit that ending! 😱

Though we didn’t get Kingpin yet at least Yelena arrived. ⭐️⭐️⭐️✨ pic.twitter.com/MsQ1OhepN8

Will we see Yelena stop hunting Clint in the final two episodes and help him take down the Tracksuit Mafia? Well we don’t know the answer to that yet, but if you want to find out then Hawkeye streams every Wednesday at 1:31pm on Disney+ Hotstar.

(The above story first appeared on LatestLY on Dec 08, 2021 08:47 PM IST. For more news and updates on politics, world, sports, entertainment and lifestyle, log on to our website latestly.com).