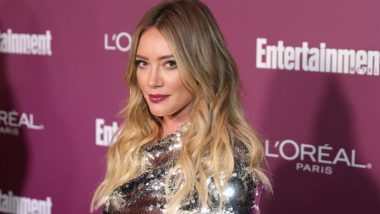 On Saturday, May 23, Hilary Duff found herself trending on Twitter and it was for one of the most bizarre reasons. Out of nowhere, many on the social media platform accused Duff of partaking in sex trafficking after the Lizzie McGuire star shared pictures of her kids on Instagram. It all started after the actress recently shared a video on her Instagram story where she showed a picture of her son—Luca Cruz (8)—laying down nude. However, she covered up his body parts in her video with stickers. Lizzie McGuire: Hilary Duff, Adam Lamberg and Other Cast Members Reunite for a Virtual Table Read Of a Season One Episode After 18 Years (Watch Video).

Not just this, her rep also released a statement with E! saying, "Everyone who knows Hilary is fully aware what an amazing mom she is and that requires no further comment. If only people with this much time on their hands used their energy to solve real problems in the world."

Earlier this week, the Younger actress had celebrated her son's birthday and it looks like they had some epic family time. "Bday Cake makin going down," she shared on Instagram Stories. Also, husband Matthew Coma had posted saying, "Making this dude's bday cake," as he shared a post.

(The above story first appeared on LatestLY on May 24, 2020 09:10 AM IST. For more news and updates on politics, world, sports, entertainment and lifestyle, log on to our website latestly.com).