Hotel Mumbai will release in India in March 2019. 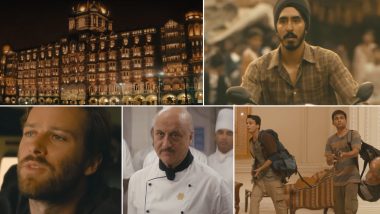 Whoever has stayed in Mumbai for long cannot forget the dark night of 26/11 ten years back. It was the night when a fee terrorists managed to get into our city and attack our people at various popular spots in Mumbai, that began with a shootout in Cafe Leopold and included CST Station and Taj Hotel. The siege of Taj Hotel by these terrorists took the longest to be brought under control. By then, many of the guests and hotel staff had been killed before our armed forces took down all the terrorists. Hotel Mumbai is a stark reminder of what happened to that night through the eyes of several people trapped in the hotel. Israel Pays Tribute to Victims of 26/11 Mumbai Attacks.

Hotel Mumbai has an ensemble cast, which includes Dev Patel (Slumdog Millionaire), Armie Hammer (Call Me By Your Name), Nazanin Boniadi (How I Met Your Mother), Vipul Sharma, Jason Isaacs (Lucius Malfoy from the Harry Potter series) and Anupam Kher. Dev Patel plays a waiter in the film, while Anupam Kher portrays the real-life chef Hemant Oberoi. Armie and Nazanin play a couple trapped in the hotel, along with Jason Isaacs' character. We have a new teaser of the film that introduces us to these characters, while also showing an overlay of the events that lead to the attack at the hotel. Dev Patel Opens Up About Hotel Mumbai.

Hotel Mumbai, directed by Anthony Maras that had its premiere at Toronto International Film Festival 2018 (TIFF 2018) had received rave reviews from the critics who attended the fest. Most of the praise went for the performances and the atmospheric dread sense that Hotel Mumbai manage to recreate. However, Indian critics criticised the film for not calling out on the nationality of the terrorists, the movie avoids to specify that they are Pakistanis. Hotel Mumbai will release in India in March 2019.

(The above story first appeared on LatestLY on Dec 11, 2018 01:43 PM IST. For more news and updates on politics, world, sports, entertainment and lifestyle, log on to our website latestly.com).