Johnny Depp has claimed that he has evidence that disproves all the domestic violence allegations that were made on him by former wife Amber Heard. 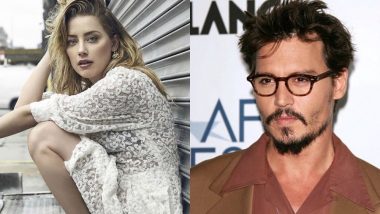 A new leaf in the Johnny Depp-Amber Heard domestic abuse case has been turned. Now, Johnny Depp has claimed that he has evidence that disproves all the domestic violence allegations that were made on him by former wife Amber Heard. It has also been revealed that the same evidence will be used in Depp's libel case against the UK tabloid The Sun which ran an article, calling the Fantastic Beasts: Crimes of Grindelwald actor a "wife-beater".

In a statement to E! News, Depp's attorney, Adam Waldman stated, "Today we filed a partial list of evidence that we will use to disprove the fraudulent underlying allegations against Mr Depp." The filing also has references to "dozens of video security tapes" and "eyewitness statements, newly discovered sworn affidavits and deposition transcripts from 2016, and text messages between the Sun and their #metoo source." His attorney further added, "We continue to take profound witness statements in this matter."

Back in 2016, shocking news surfaced all over tabloids, newspapers, internet, when reports of Amber Heard accusing then-husband Johnny Depp of domestic violence surfaced. The lawsuit referenced an alleged argument between the then-married couple which resulted in Depp throwing a cell phone right at her. It struck her in the eye and cheek. She further claimed that in April, Johnny also threw a "magnum size bottle of champagne at the wall and a wine glass on me and the floor—both which shattered."

As per a report on People, Depp is suing the UK tabloid for "£200,000 pounds in addition to £10,528 in legal fees, as well damages to be assessed by the court." He will also be seeking an injunction that will forbid the paper from publishing allegations of spousal abuse. Amber Heard is yet to comment on this new development.

(The above story first appeared on LatestLY on Jan 23, 2019 10:23 AM IST. For more news and updates on politics, world, sports, entertainment and lifestyle, log on to our website latestly.com).